Discovering the Arctic with Silversea – Part Two: Sights, Sounds and Experiences of Norway and Svalbard

In the first instalment of my blog, I talked a lot about Silver Cloud, her facilities and the concept of expedition cruising because when you're going to be on board for 12 nights as I was, or even longer on some voyages, these elements make up a large part of the experience. But the vital part of the expedition cruise equation is the itinerary, and in this respect my expectations were well and truly exceeded!

Our first few days showed off Norway's famed fjordal coastline and although the weather was predominantly overcast, I soon learnt that Norwegian scenery in dramatic, moody style was as captivating as when the sun made a cameo appearance and the colours leapt out in brilliant rainbow shades. Time ashore initially involved travel by coach, including such excursions as a UNESCO World Heritage Site dedicated to eider ducks (now I know why an authentic eiderdown duvet could set you back several thousand pounds!) and quaint fishing villages in the Lofoten Islands. The further north we sailed though, the more it was zodiacs and "Shanks's Pony" to get about, as the "expedition" nature of the cruise became more apparent.. 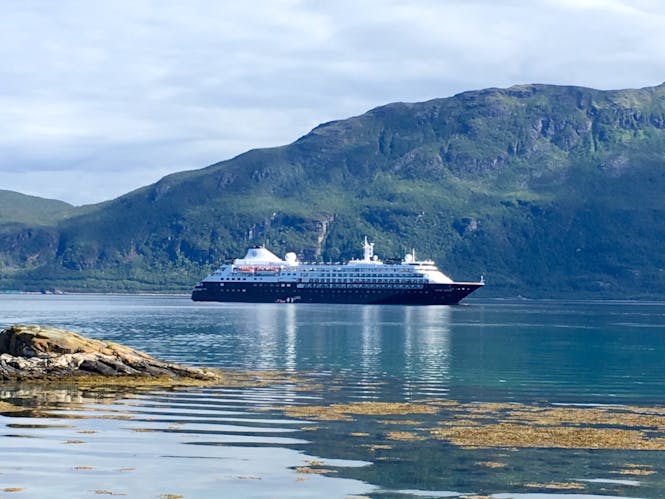 One of my favourite landings was when we visited Rolla for a hike up to a lake and viewpoint. This was actually one of those aforementioned "Plan B" landings but turned into a fantastic morning not only for the hike but also for the reaction of the local community. People in the small settlement came out to talk to us, gave us some of the local speciality "stockfish" to try, and shared knowledge about the area's strategic importance during World War Two. One man who was a child here during those years remembered how German soldiers had requisitioned his family home for billets, but what stood out for me was that he said they hadn't seen a ship of Silver Cloud's size in the fjord since wartime. In an age where many ports of call are regular stops for cruise ships, the fact that we were the first such visitors encapsulated one of the key differences of expedition cruising; that ability to go off the beaten track and explore new destinations.

Onwards we sailed to the Gejsvaerstappen Islands, home to over two million birds, including a colony of over one million puffins. Our zodiac cruise around the island got us up close and personal to them and we were privileged to sight two sea eagles. Next up we sailed around the Nordkapp, the northernmost point of mainland Europe, to Kirkenes and a visit to the Russian border before saying farewell to mainland Norway and heading due north (OK, I'm sure the Captain would tell you it wasn't absolutely due north but it felt like it!) to Svalbard.

Our five days in Svalbard were my undoubted highlight of the cruise. The fjords and scenery of Norway had been every bit as beautiful and memorable as I'd heard tell but Svalbard simply took nature's wonders to another level. Jagged, snow-capped mountains reaching for the deep blue sky or at times disappearing from sight into the clouds; glaciers that seemed merely of average height from a distance yet towered over us as we neared them in our zodiac; icebergs freshly "calved" from those self-same glaciers that appeared everything from brilliant white to searing turquoise blue and were every shape and size imaginable - and unimaginable. 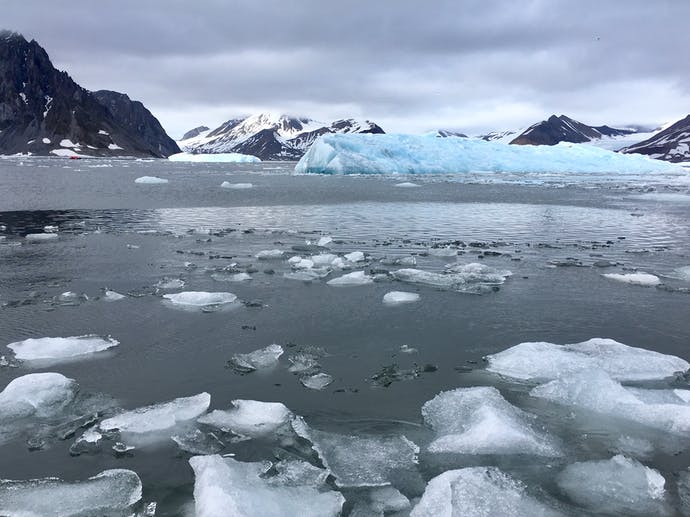 But it wasn't just seeing that was believing; Svalbard touches all the senses. As our zodiac made its way towards one glacier the outboard motor was switched off and we listened, at first to a silence only broken by the occasional bird but then hearing the cracking of the glacier as it inched along its interminable journey towards the sea and prepared to give birth to another mighty iceberg, a sight that we were lucky to see, hear and feel as a gigantic arch crashed down into the fjord, setting forth a mini-tsunami of waves that we could feel even at a safe distance from the glacier.

A much smaller chunk of centuries-old ice was fished out of the fjord by our guide and we took turns to hold it and feel the oxygen bubbles in it popping on our skin. And in a special Silversea touch, towards the end of yet another sensational sortie into an ice-filled fjord we "happened across" a fellow zodiac with crew serving warming hot-chocolate laced with rum - one to set the tastebuds tingling! 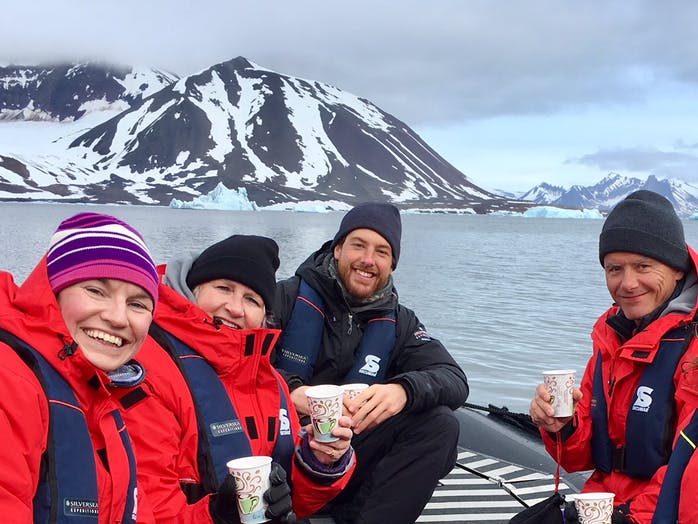 Svalbard isn't only about scenery and zodiac cruises though; there are fascinating historical and cultural aspects relating to the former whaling industry; we came ashore to walk the beaches and hike up smaller slopes learning about the rich carpet of colourful alpine flowers clinging to them; for those fit and able there was a more challenging hike up onto the edge of one of the glaciers; and there was the occasional sighting of Svalbard fauna too in the shape of a few reindeer, the odd arctic fox and the incredible sight of around a dozen walruses lying together on a beach at one of their renowned "haul out" sites.

One animal that loomed large in everyone's minds was the polar bear. It's fair to say that most people, myself included, were hoping to see one of these majestic creatures but we learnt, as part of the second mandatory briefing held before we reached Svalbard, that it would be unlikely on this particular voyage. Firstly, because the ice sheet was almost 200 kilometres further north this year (whether as a one off or as a symptom of global warming remains to be seen) and that meant that many of Svalbard's population of around 3,000 polar bears would have followed it. Secondly, and perhaps most importantly, because for the protection of the bears and for our own safety, the four bear guards aboard (required by law) would scope out landing areas well in advance of our arrival and if a bear was sighted we would either observe from a very safe distance from aboard Silver Cloud or change to Plan B and sail on to land somewhere completely different.

If there was an element of disappointment amongst some of the guests, the majority understood the rationale behind this policy and were delighted that we did strike lucky, with one brief sighting of a lone bear, best observed through binoculars from the deck of Silver Cloud. My camera lens wasn't up to the job of capturing this sight for posterity but I have the memory forever, to replay in my mind's eye whenever I wish - and after all, isn't that the way we all used to do it before we became accustomed to experiencing life through the screen of an iPhone…?

Learning from the experts

If the scenery was the undoubted star turn of this cruise, the expedition team truly ran it a close second and their energy, enthusiasm and expert knowledge infused and enhanced every element of the voyage.

Encompassing a wide range of ages and nationalities, their number included a historian, marine biologist, glaciologist, Arctic nature guides, zodiac drivers, bear guards, a photographer, naturalists, kayak guides and many more. They were on hand not only for the landings and shore excursions but also gave fascinating lectures and presentations on a variety of subjects linked to the regions we were sailing through and were happy to join you for dinner if you wanted to discuss anything in more depth or simply hear more about their varied experiences inside and outside the expedition cruising world. Some were part way through a stint of several months aboard Silver Cloud, others were due to switch to other of Silversea's expedition ships, while a handful had joined just for a couple of voyages because their specialist local knowledge would enhance our experience. 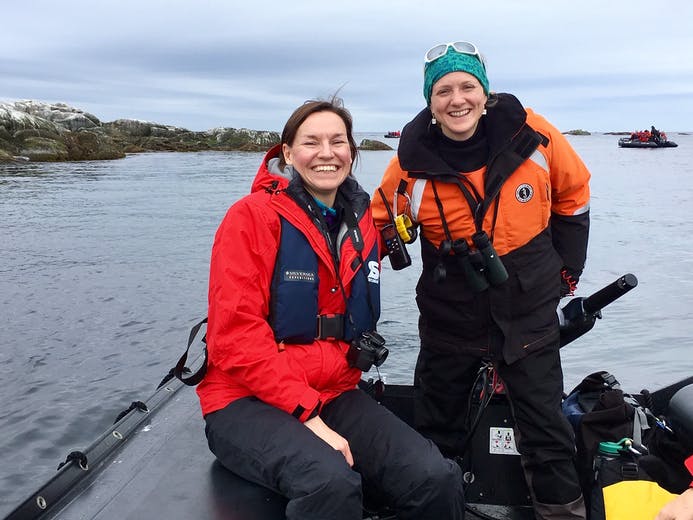 The days in Svalbard blended into each other - literally, as the cruise was taking place during the annual period of "Midnight Sun" - and all too soon we were docked alongside ready to disembark at Longyearbyen, Svalbard's main settlement (population c.2,500) for the short transfer to the airport and Silversea's chartered flight to Oslo. 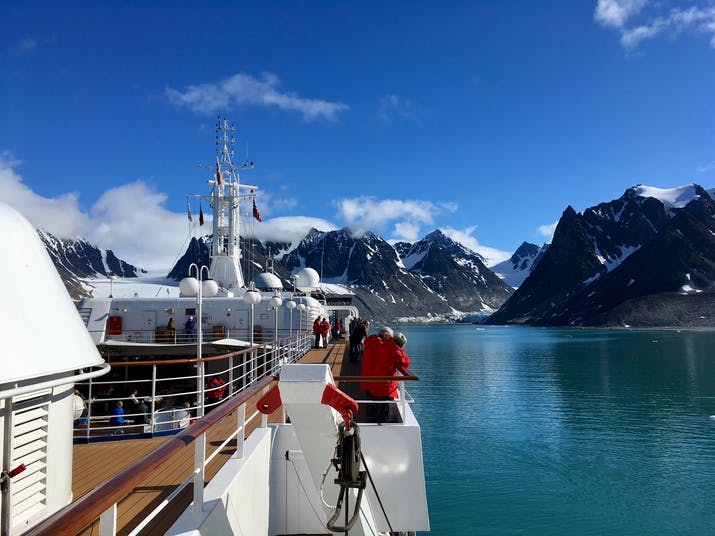 So how would I sum up my first taste of expedition cruising, other than to say that I hope it won't be my last?

I would recommend a Silver Cloud expedition cruise for anyone who loves small ship luxury cruising and is tempted by the destinations that expedition cruising offers but isn't sure whether the expedition lifestyle is for them. The comfort and reassurance provided by the slightly larger ship offer the ideal way of dipping a toe into the waters of expedition cruising, and from chatting with other guests I've no doubt that for some the experience will become a stepping stone to a voyage aboard one or more of Silversea Expeditions' smaller ships; Silver Galapagos, Silver Explorer and Silver Discoverer. Others told me that they wouldn't want to "go any smaller" so would look out for other Silver Cloud itineraries, while for some this was truly a one off and their preference will remain with the classic ships. One thing in common for us all though; this Silver Cloud Expedition cruise was an incredible, memorable experience!

Fancy embarking on a Silversea expedition cruise yourself? Contact our Travel Specialists today on 01244 355 600 for more information or a bespoke quote, or browse our entire luxury cruise portfolio online.