7 Japanese Food and Drinks you have to try

Are you going on a luxury holiday to Japan?

There are so many sights and sounds across Japan that make the Asian nation a bucket list destination for many.

Whether it’s Tokyo and the Shibuya Crossing, Osaka and its Blade Runner-style neon-lit nightlife or the temples and shrines of Kyoto, everywhere you look there is something more interesting and exciting to discover.

This is especially true of Japan’s cuisine. While many of us would be familiar with sake and sushi, there are so many more delicacies and local dishes waiting to be discovered that can really enhance your experience of Japan.

Did you know: Tokyo has more Michelin-starred restaurants than any other city in the world, including Paris.

But it’s not just the high-end eateries that pull tourists to Japan. The country is teeming with regional dishes and unique flavours that offer an incredible insight into the ‘Land of the Rising Sun’.

So if you're interested in trying Japanese food, don't miss out on seven food and drinks you need to experience whilst on holiday in Japan.

Read on to discover more:

Roughly translating to ‘cooked however you like’, this famous snack is a savoury pancake made with buckwheat flour that’s garnished with an abundance of spiced cabbage together with array of different toppings of your choosing. Meat, seafood, spring onions and eggs are some popular additions, along with Japanese mayonnaise, soy sauce and other condiments to create a unique and incredibly filling snack.

Although they are found across the country, okonomiyaki is most prominent in the cities of Hiroshima and Osaka. When you are on your holiday in Osaka, we highly recommend finding somewhere to try okonomiyaki along Dotonbori canal, so you can watch the throngs of tourists and locals enjoy the sights as you tuck in.

Meanwhile, one of the best places to go in Hiroshima is the station, where you’ll find a number of different restaurants on the upper floor providing an excellent opportunity to fuel up before venturing out into the attractions of the city and beyond. And, because these two cities have their own take on the dish, it’s well worth trying it in both areas. In Osaka, your pancake will usually be topped with your additions, while in Hiroshima they will be mixed together so you can get all of the flavours at once. 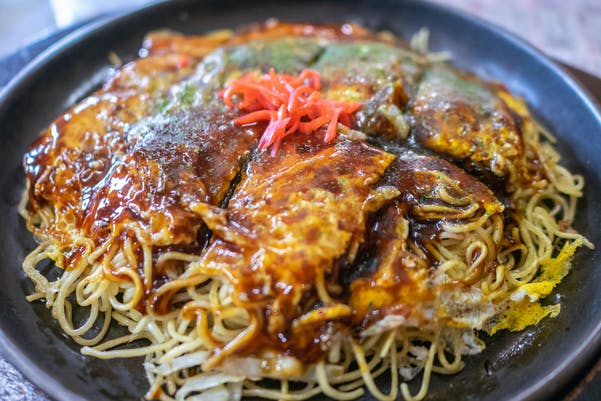 Popularised in Osaka and often simply referred to as ‘octopus balls’, this must-try Japanese street food is made of batter filled with minced octopus that’s cooked in a special moulded pan to produce delicious spherical delights. They can then be topped with green onion, dried fish shavings, takoyaki sauce and mayonnaise. Equally popular among tourists and locals, you’ll often see people eating takoyaki before a night out.

Finding where you can buy takoyaki is easy if you keep an eye out for the distinctive hemispherical pan. Be careful though – once cooked, the takoyaki can be molten so be prepared to wait just a few minutes before tucking in. 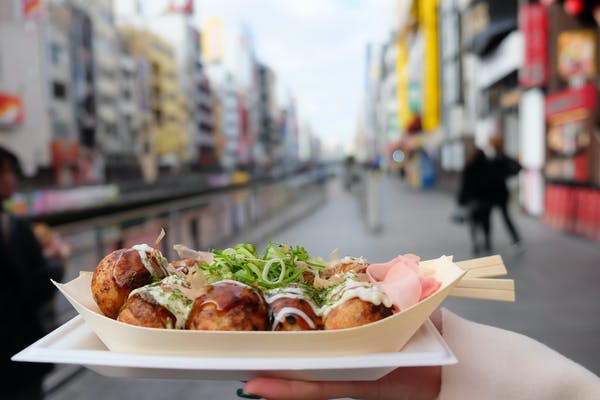 For all of the flavour of a beer without the alcohol, make sure you get a taste of Hoppy, an almost non-alcoholic beverage that has the distinctly hoppy taste of beer. You’ll be given a chilled glass filled with ice and shochu (a Japanese distilled alcohol) that, when poured into the glass with the hoppy gives you that foamy head reminiscent of beer.

Mixed with shochu it’s a refreshing drink that many a Japanese salaryman sups in an izakaya after a long day in the office. Experiencing this is a great reason to go on a food tour of Tokyo.

Since you can’t really get hoppy anywhere else in the world, it gives you a real taste of Japan.

Plus, it’s perfect alongside tempura meat and vegetables.

Whiskey Highballs are incredibly popular in Japan. They are so ubiquitous that you can even get them pre-mixed at convenience stores across the country alongside popular beers like Asahi or Sapporo.

Simply made with soda, like hoppy, they are a great way for to unwind and refresh after a busy day exploring.

Though highballs have always been popular in Japan, they have seen a recent increase in popularity thanks to a successful advertising campaign by Suntory, a Japanese whisky company. Added to this, a recent TV show that serialised the life of Masataka Taketsuru, the founder of Nikka Whisky, has brought the drink to the fore once again.

As well as whisky, you can also see highballs with shochu or vodka. They may even be found with pickled plum or lemon in them to provide added dimensions to the flavour.

If you are wanting to explore your whisky knowledge further, a short train journey from Kyoto will land you at the Yamazaki distillery (the first purpose-built whisky distillery in Japan) where they offer English guided tours and tastings.

Traditionally, it is skewered chicken that is cooked over a charcoal fire and lightly seasoned and flavoured with salt or soy sauce. To add a salty-sweet flavour a sauce called tare containing mirin, sake, soy sauce and sugar is often added. Because of the ease of transport, you’ll often find yakitori street stalls (called yatais) dotted around popular sites and destinations.

If you are vegetarian, then yatai stalls will often also sell mushrooms, peppers or asparagus as alternatives. 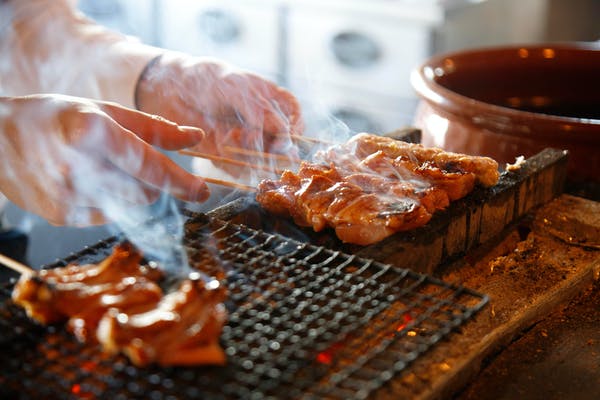 At the train station in Kyoto, there is a saying plastered across the wall in the food court – “don’t think, just slurp” and that is exactly how you should enjoy your ramen noodles.

Don’t worry about the noise – it’s an indication to the chef that you are enjoying what they made. Simply put, ramen is noodles served in a broth (usually chicken, pork or fish) that comes with a variety of different toppings including pork, mushrooms and scallions.

Each area of Japan will have its own take on ramen so it’s a great idea to tuck into a steaming bowl wherever you go.

For example, Sapporo, on the north island of Hokkaido, is famous for its miso ramen.

Meanwhile, Asahikawa has a variety of ramen served in a hot soy sauce flavoured broth that is usually a welcoming treat considering that the city has reached temperatures of -41 degrees Celsius, the coldest ever recorded in Japan. This fiery favourite is also found on Hokkaido and near to the Daisetsuzan National Park. 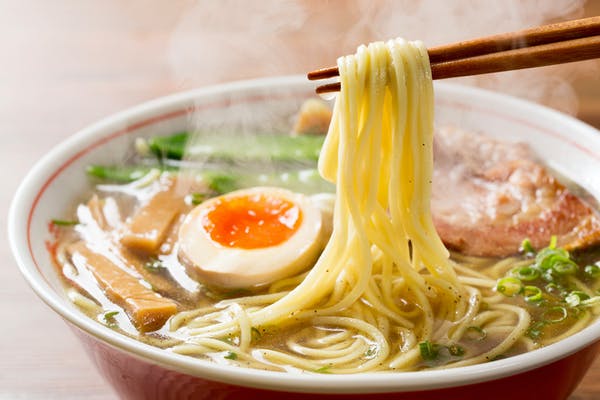 Disregard any British sensibilities with Ramen - slurp and enjoy!

Japan is filled with small convenience stores which offer a delightful range of small snacks that are not to be missed. For a start, Sandos are tiny sandwiches filled with egg, chicken or meat that are ideal for a little bite to keep you going while you’re exploring a city or visiting a temple or shrine.

You’ll also find Onigiri which are small balls of rice wrapped in seaweed and often filled with meat or other more interesting flavours such as tuna mayonnaise or pickled plum.

For dessert, we also recommend picking up a dorayaki, which are sweet pancakes often sandwiched with cream. 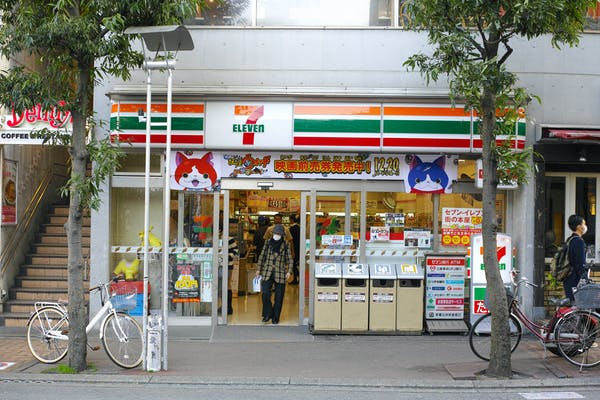 Hopefully, by tackling these seven Japanese food and drinks you’ll be prepared to experience and enjoy the varied cuisine of Japan… just don’t forget to try the sake and sushi as well!

Inspired to visit Japan on a luxury holiday? Speak to our travel specialists today. 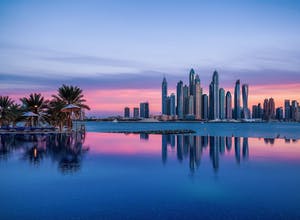 So much of 2020 has been about what we can’t do. So, Travel Specialist Kelsey was delighted to head on a trip to Dubai recently to tes...
READ MORE