From the porthole of the sea plane, the cobalt waters below were dotted with white-edged rings of vivid turquoise. Like the eyes of a peacock’s tail, the islands and atolls shimmered in the Indian Ocean – some already transformed into island resorts, others pristine, still. A half hour after taking off from the airport, the Four Seasons Landaa Giraavaru hove into view – first its row of overwater villas projecting into an expanse of transparent jade, then its lush, jungly interior, and finally, the creamy sands of Blue Beach. My first impression, which would only intensify, was one of impossibly vibrant colour, and of an island cocooned from worldly concerns.

“Maldives – one of the wonders of the world” wrote the Moroccan scholar and traveller, Ibn Batutta, in the 1340s. And from this base within the UNESCO Biosphere Reserve of Baa Atoll, it’s not hard to see why. Landaa Giraavaru’s prelapsarian appeal has been preserved, with meandering sand paths around the island, which are negotiated by buggy, or on bicycles bearing your initials. My beachfront villa, airy and rustic, led onto a huge outdoor living area, with swimming pool and upstairs look-out – just metres from the water’s edge, fringed by palms and emerald vegetation. I could happily have lounged here, lizard-like, for a week, ordering room service from the choice of four restaurants, simply listening to the lapping waves and twittering birds that came to perch, fearless, in my domain. But, goodness – who would have thought the Maldives would keep one so busy? 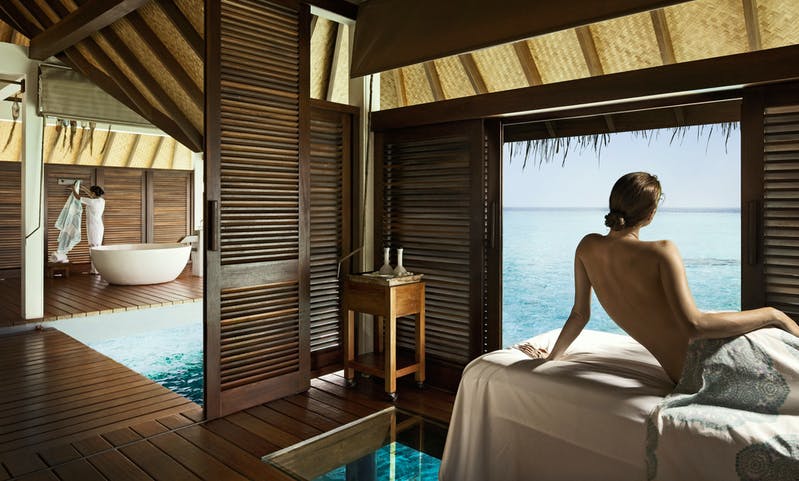 First, there is the Spa (“busy” being a relative concept), with its full range of massages and Ayurvedic treatments, administered by the delightful Dr Shylesh. On day one, he sorted my Vatta from my Pitta, and recommended corresponding treatments and massages. “We have all the five elements of Ayurveda here, in their purest form” he explained of the move towards holistic healing. “Space, air, fire, water and earth – and these are all present in our bodies in the form of the three Doshas”. They are also present, in abundance, in the Spa Suites – whether over-water, or set in the floriferous gardens – vast, fragrant and luxurious. A delicious Loabi Signature massage employed everything from hot poultices to singing bowls to relax my frazzled post-flight nervous system, while the fish swimming beneath the glass floor provided entertainment, and reminded me of where I was...many moons from the irritation of builders, just 24 hours earlier, at my London abode!

I continued in sybaritic vein for a couple of days – spending one of them on a tiny deserted island accessed by speedboat, and furnished only with a sun-bed, parasol, and a hamper of food and chilled wine – the better to nurture Robinson Crusoe fantasies. It was hot, lazy, and heavenly. But the resort’s range of conservation projects would soon tempt me into more edifying activities...

Landaa Giraavaru’s Marine Discovery Centre has recently received a makeover to provide comprehensive information about the genesis of the islands and the threats they face from global warming and other environmental issues. I found myself learning about Four Seasons’ successful programme to regenerate coral reefs – which have, as a result, seen a 20% growth around the island over the last 15 years. I met Maldivian clownfish, in various stages of development – part of a breeding programme to replenish their dwindling numbers. And I played with Olive Ridley turtles undergoing rehabilitation after being found damaged by fishing nets. An afternoon was spent snorkelling around the soupy-warm house reef with Audrey – one of ten full-time marine biologists at the two Four Seasons Maldives resorts – to discover a silent underwater world teeming with life and colour; and to see turtles “in the wild”, which were photographed to be identified (by the unique markings on their head), and logged onto the Centre’s Turtle Database. “If this one has not already been registered, you can name it,” promised Audrey. It hadn’t. And I named him Vesuvio, for the crater bitten from his shell by a shark. 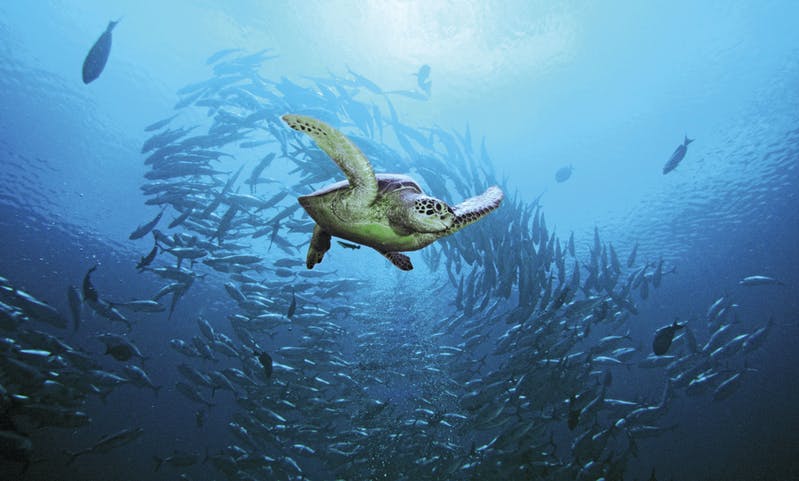 Much of my time was spent at the Dive Centre, where an excellent team cajoled me through a crash-course in SCUBA diving. I gained my PADI certificate in the nick of time, as I was about to board the Four Seasons Explorer catamaran for a manta ray and whale shark cruise in the company of Dr Guy Stevens. Although many alternatives were possible to the three daily dives offered on board, FOMO would certainly have set in had I not been able to join my fellow-guests in the deeper blue.

As it happened, I saw manta rays while still on Landaa Giraavaru. It was the southwest monsoon season, when reef manta rays congregate in nearby Hanifaru Bay to feed on the huge quantities of plankton that are found in this area – and scouts were searching for them. Once the rays were sighted, we were alerted, and on our way. The Maldivian Manta Ray Project (the foundation of The Manta Trust charity) set up by Guy Stevens, is perhaps Four Seasons’ best-known project. Based since 2005 at Landaa Giravaaru, it undertakes conservation, education and invaluable research on these creatures about which so little is known. We were lucky that Dr Stevens was present. Learning about the rays from a distinguished authority, being among them and watching them feed – a graceful chain of forty giant fish whirling like dervishes around us – was an unforgettable highlight of the trip. The rays, too – distinguished by the black blotches on their white bellies – were dutifully photographed, and the data recorded for research purposes. 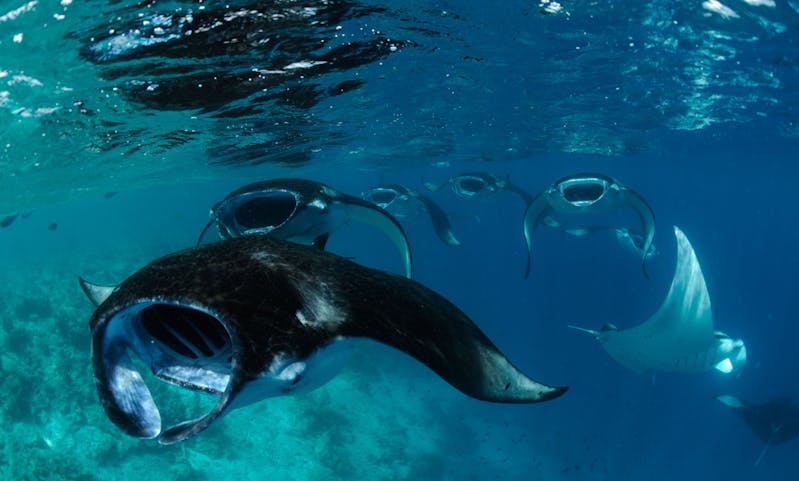 My activities, however, were not altogether unimpeachable. Ever in pursuit of that Hemingway moment, I went deep sea fishing one morning aboard a beautiful teak-lined Viking 55, expertly rigged by Captain Mode with a cat’s cradle of rods and lines, trolling for marlin. The big game, alas, remained elusive, but we had more luck casting. We returned with a brace of bonito, a wahoo, a rainbow runner, and a giant trevally – which turned up at dinner that night: beautified, sashimied, tatakied, torched, and seared with sauce vierge. With a moonlit beach restaurant as the setting, the experience was as good as it gets!

Teresa Levonian Cole has spent the last 20 years trotting around the globe in search of the rare, the remote, and the fabulous. She writes about travel, culture and luxury lifestyle for a range of newspapers and magazines, including the FT, Telegraph, House & Garden and Spears.

Teresa’s review first appeared as one of the many inspiring travel articles in the spring 2018 issue of ITC Travel Group magazine Other Shores. Order your free copy today on our brochure request page.