Inspiring Travel Company clients Elizabeth Banks & Neil Gauld remember their journey on Concorde… In 1992/3 after an unsatisfactory holiday (not with Caribbean Connections we might add!) we put the compensation money that we received into a savings account to put towards a future holiday. Something special we thought, but with nothing in mind.

In 1993 we attended the practice days and all match days at the Ryder Cup at the Belfry and whilst waiting for the AA to arrive the day afterwards, as our car had broken down, Concorde flew overhead, sadly taking the cup with it to America. Whether that was when the seed of the dream was first planted we can’t be sure. Over the next few years we were unable to take a long holiday but it was during this time that we first came across Caribbean Connections (now Inspiring Travel Company) when we picked up your brochure in a local independent travel agents.

We fell in love with the open-sided rooms of Ladera between the scenic Pitons and the look of Anse Chastanet in St Lucia. It was also the time when the dream of flying on Concorde really cemented itself - not just a short one hour round-trip flight, but to travel to Barbados or New York on the aircraft. That special holiday formulated in our minds and the money had to be saved - fly to Barbados, then on to St Lucia, and stay at Anse Chastanet and Ladera. It would be our tenth wedding anniversary in 2000, so why not then?!

It was all booked with Inspiring Travel Company through British Airways travel shop in Edinburgh. Four months to go and then it happened – on 25th July, 2000, Air France Concorde flight AF4590 crashed on take-off from Roissy Charles de Gaulle airport. Despite Concorde’s incredible safety record both Air France and British Airways Concorde fleets were grounded. This was not fair - they didn’t ground entire fleets when other aircraft crashed.

Our hearts were in our mouths as we went to the BA travel shop - the dream was over!

Our flight to Barbados was changed without any problem and the holiday went ahead. Travelling via Barbados resulted in a very long day for us and after a long and winding mini-bus journey from George F L Charles airport we arrived at Anse Chastanet too tired to eat and simply went to bed. Two days later we both went down with colds. Not quite the dream holiday we had had in mind! In late 2001, when Concorde was passed fit to fly passengers again the decision was not hard to make; despite having already planned our holiday for 2002 (the Commonwealth Games in Manchester). What if Concorde was finally retired? 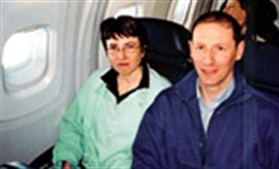 We will never forget that day: * Checking in and the Concorde tags being added to the luggage * Walking into the first class lounge to see Concorde sat on the tarmac in front of us. It was one of those ‘pinch me, I am not dreaming any more’ moments * The announcement ‘Supersonic flight BA273 to Barbados is now ready for boarding’ * Settling into our seat and hearing this voice a few rows ahead of us ‘Hi Dale, I have forgotten the gas canisters for my heated curlers. Would you bring them out for me next week?’ A few heads looked up. Cilla Black had slipped on board without us noticing! * Watching the graphics at the front of the cabin increasing up to Mach 2.0 * The delight at discovering a cheese we love and regularly buy from a local cheesemonger being listed on the menu and hence regarded as World Class!

We arrived in Barbados all too soon and in a strange way this was the one flight to the Caribbean we wished had lasted longer. On landing the Captain reported the Barbados control tower had simply said ‘Welcome Back’. We were the first flight out in 2002. We took our time disembarking, savouring every moment, a quick look into the cockpit (sadly restricted viewing now due to the events of September 11, 2001) and then down onto the tarmac getting those very important photos of us standing next to the aircraft. We hadn’t told our families we were travelling on Concorde however we did make references in the postcards sent to them soon after arriving – “Left London at 9:30; arrived at Barbados at 9:45, and we are now technically astronauts”! Some worked it out, whilst others didn’t.

On 24th October, 2003, we travelled out to Edinburgh Airport to wave a sad and fond farewell to simply an iconic aircraft, still modern 34 years after its creation. On the television programmes we saw we listened to interviews of people who had been planning a trip on Concorde for a special event which was now not to happen for them. We could only wonder how we would have felt if we hadn’t taken our chance.

Our love affair with Concorde has continued right up to this day. In 2010 we renewed our wedding vows after 20 years of marriage and had a celebration event for friends and family. The table names were associated with various places we had visited over our married years and we also pulled together picture boards to go along with those places, as a reflection of some of the most memorable things we have done in a life of ups and downs. There was never any doubt that our flight on Concorde would be included and take pride of place on those picture boards. We also obtained another treasured memento in the form of one of the original technical design drawings of part of the aircraft.

Writing this has brought back some wonderful memories for us. We have kept our boarding passes, luggage tags, diaries (unused in Liz’s case as she was afraid to make a mess of it with her untidy handwriting!). The photograph album and memorabilia folder have been pulled out again and slowly gone through, along with a glass of Champagne and a toast to the one and only Concorde.

Thank you Inspiring Travel Company as you have prompted us to spend an evening reminiscing on a dream fulfilled.