With global travel becoming more and more popular, it’s important we search for ways to reduce our environmental footprint and make our holidays more sustainable and responsible.

At Inspiring Travel Company we’re always on the lookout for inspiring people to highlight this cause and this issue we’re delighted to introduce Dr Claire Lomas, a Veterinary Surgeon working on marine conservation with The Olive Ridley Project in the Maldives. Kumari Tilakawardane caught up with Claire to learn more about how she’s saving the world, one turtle at a time…

What first inspired you to become a vet?

I’ve wanted to be a vet ever since I can remember; it wasn’t really a decision, more of a lifelong passion. I studied veterinary medicine at Edinburgh University and always hoped to work with wildlife in conservation; in university, I worked a lot with exotic animals. After graduating, I did some remote charity work in Morocco before joining a UK practice that specialised in exotic animals. When I saw the advert for the Olive Ridley job it was an absolute dream that combined all of my passions; veterinary medicine, conservation and marine life – the opportunity of a lifetime.

Tell us about The Olive Ridley Project and how you got involved.

It’s a UK-based charity that works in the Indian Ocean, fighting the problem of ghost gear and its impact on sea turtles. Ghost gear means discarded, lost or abandoned fishing nets. They float in ocean currents, harming and killing marine life; a devastating impact of the fishing industry which is not commonly known or talked about. I work at the Sea Turtle Rescue Centre in the Maldives (based on Coco Palm Dhuni Kolhu), the first and only veterinary clinic in the country that has allowed sea turtles to receive care.

What does a typical day for you look like?

It’s very varied as you can imagine. The busy season is December to April due to ocean currents washing up turtles entangled in fishing nets. I’m on call around the clock; if I get called, I arrange transport to get the turtle to our island. We are a small team, often just myself and one intern. Some days we have surgeries or other veterinary procedures. We also take turtles swimming as part of their rehabilitation! We monitor nests when female turtles come to lay eggs – I’ve had a few early hour missions to collect lost hatchlings and take them to the ocean. I also organise community outreach projects and I’m currently helping to organise our atoll’s first turtle festival to raise awareness. 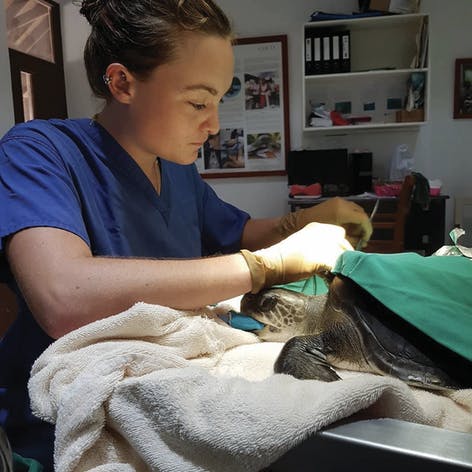 What’s been the highlight of your career so far?

To see a turtle arriving with terrible injuries, treat them and then see them recover and be released back home to the ocean is a feeling like no other. My biggest highlight was Chouchou, a young olive ridley turtle who needed her front flipper amputating after getting entangled in a ghost net. Anaesthetic always carries a risk, even though we take every precaution. Despite the surgery going well, Chou became lifeless six hours after surgery and showed no signs of life apart from an occasional heartbeat (reptiles can retain a heartbeat long after death). I have a stubborn nature and refused to give up, so I gave Chou adrenaline and breathed for her using a bag for 36 hours; I sat with her in my shower to keep her warm and damp. It was exhausting having no sleep but very slowly she started showing signs of life. Two days later she made a miraculous recovery and became a strong and healthy turtle. Releasing her back to the ocean and watching her swim off after all that effort was truly remarkable.

Which turtle species is most under threat, and why?

The most endangered species is the Kemp’s ridley turtle, a close cousin of the olive ridley species. They are only found off North America in the Atlantic and the Gulf of Mexico. As for why, there are many factors such as poaching, ghost gear, bycatch, habitat loss and pollution. Weather changes cause many to wash up cold-stunned each year in east America.

The most endangered species found in the Maldives is the hawksbill turtle, which is at risk of extinction. Hawksbills are the primary source of tortoiseshell material so are poached worldwide, despite having protective status in many countries.

Sea turtles have been on this planet for 65 million years; the leatherback turtle was swimming in the oceans whilst T-Rex was walking on land! However, in the last 100 – 135 years they have been put at risk from human activity, with many populations declining 80 – 95%. Sea turtles take a long time to mature and can take anywhere from 20-50 years to start reproducing, so it takes a long time for populations to recover. 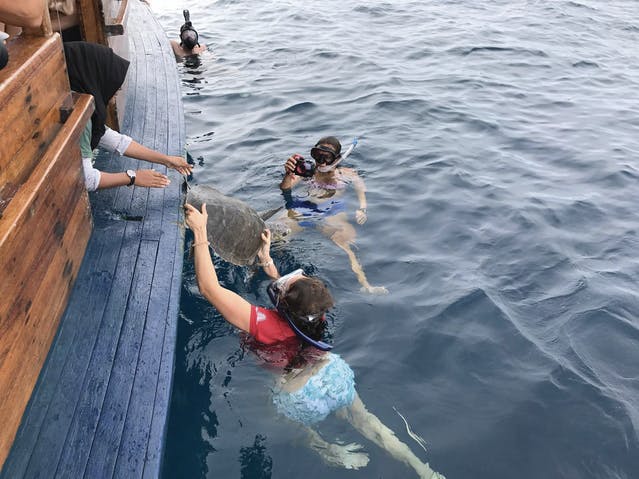 What are the biggest challenges you face in your job?

The biggest challenges come from working on a remote island with limited access to the supplies and equipment found in most UK practices. We are so fortunate to now have X-ray and ultrasound facilities set up… in the past, we had to take turtles by speedboat to human hospitals! Medicine can take a while to arrive, which is difficult if I get the sudden arrival of an unusual case that needs something specific. The job has made me resourceful and good at problem-solving - I have made everything from turtle buster collars to flipper-splints out of recycled plastic!

Working with sea turtles is a very niche area of veterinary medicine so there are few research studies to direct me on best treatments. We are trained to work using scientific evidence, which is not always possible with sea turtles – particularly olive ridleys as there aren’t many centres around the world that work with them and very few research papers have been carried out. This is something I’m hoping to change in the future. 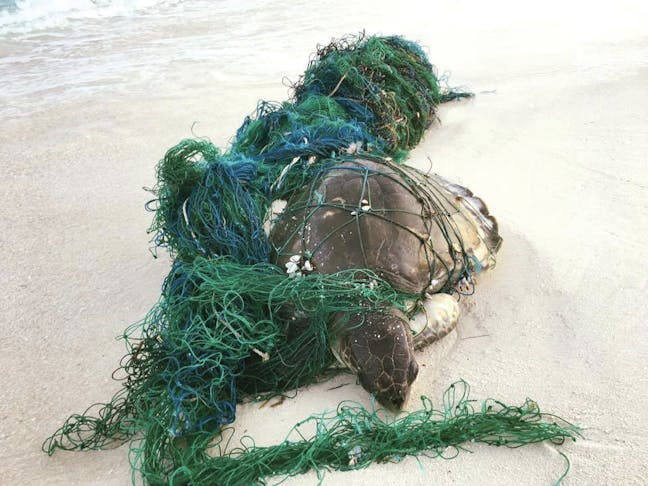 What are some small everyday changes we can all make to help?

First, to help combat ghost gear, think about reducing how much fish you eat. It’s fine to eat fish, but only buy sustainably caught fish (caught using pole and line technique and not fishing nets). It is also more sustainable for fish stock and will allow us to continue fishing in the future by maintaining fish populations.

Think about personal plastic consumption. Some 50% of all plastic is only used once; an example is plastic straws and coffee cups. They are only used for around five minutes, then will be thrown away and remain on our planet for hundreds of years. Try not to buy single-use plastic, take bags for shopping, buy reusable cups, avoid plastic packaging etc. I love the phrase ‘“it’s only one straw…” said seven billion people’.
Recycle everything you can but I think the main long-term solution is actually reducing the amount of plastic being used and made, as plastic can only be recycled a few times.

Should you wish to see the amazing work Claire and her team are doing in the Maldives, discover more about Coco Palm Dhuni Kolhu, where the project is based.