Why you should visit Grantley Hall

As you may already know, we have recently expanded our portfolio to include a range of luxury hotels and resorts dotted throughout the UK and Ireland. To give you a little taste of what you can expect, we sent one of our Travel Specialists, Emma Fountain, along to check out Yorkshire’s most luxurious hotel and resort, Grantley Hall.

As a born and bred Yorkshire lass, I couldn’t wait to experience what Grantley Hall had to offer. I’d heard good things about the property before I arrived but let me tell you this: I’ve been in the luxury travel industry for 25 years and I can honestly say that this is the best luxury resort I’ve been to so far.
It’s located on the doorstep of the Yorkshire Dales in Grantley, which is an area that’s not only close to my heart but also close to my home – just 30 minutes away.

I knew I was in for something special as soon as I arrived at the estate’s gatehouse. Much to my surprise, I learned that Grantley Hall is actually set on an island surrounded by the River Skell and I would need to cross a bridge before I could reach the estate. But, if you really want to arrive in style, you can also arrive by helicopter or by the property’s Bentley. What a way to start your luxury UK holiday! 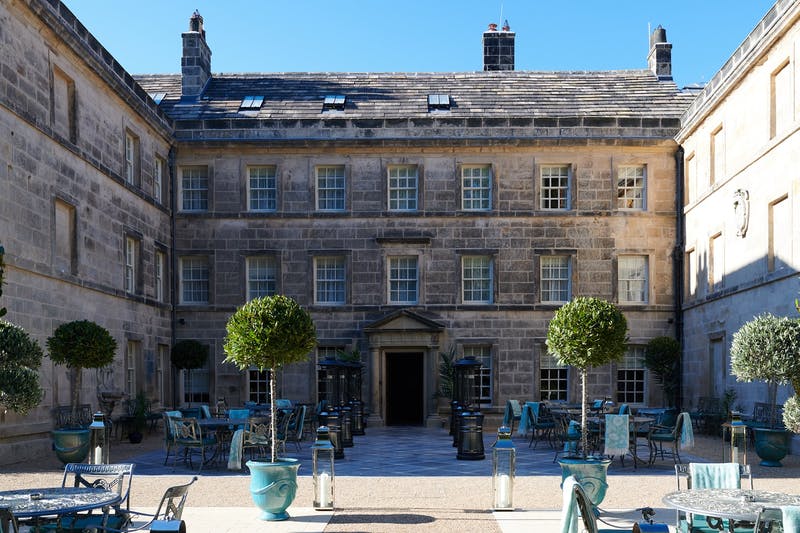 Originally built in the 17th century as a family home of the Nortons, over the years Grantley Hall has housed various members of the family, served as a rehabilitation home for soldiers injured in the second World War and later as a residential college, before eventually laying empty for a number of years.

In 2010 it was picked up by Valeria Sykes who had the dream of restoring it to its former glory and creating an uber-luxurious countryside retreat. Following a number of years carefully renovating the Grade II listed manor house and constructing additional buildings, her dream has been realised; transforming Grantley Hall into one of the UK’s best luxury resorts and the only Relais & Châteaux property in Yorkshire.

The efforts that Valeria and her team have gone through to preserve the history and original features of the manor house were clear as soon as I was being shown to my room. Throughout the building I noticed antique features such as stucco ceilings, arched columns and wood-panelled walls, giving each space a traditional feel that held true to the building’s past. I was even told that all 46 of the original fireplaces have been retained and lovingly restored!

Even with these traditional features, it never felt outdated. Contemporary touches such as brightly coloured fabrics and modern furniture gave it a fresh vibe and had a stylish flair that I recognised from other Relais & Châteaux properties I’ve seen in the past.

I was lucky enough to get a tour of all of the 31 rooms and 16 suites on offer and was really impressed with their décor. Dressed in soothing tones of creams and browns, each was filled with luxurious features such as bespoke mattresses, deluxe bed linen with the Grantley Hall crest embroidered in gold, Italian marble bathrooms and carpet so thick it felt like I was walking on air.

While the rooms in the Queen Anne Wing transport you back in time with more traditional touches such as rich velvets and dark woods, the rooms in the newly-built Fountains Wing were brighter, with subtle touches that give an up-to-date feel.

Without a doubt, the most memorable room was the Royal Suite which is set in the central tower that overlooks the beautiful grounds and gardens. Set across two floors, there’s an incredible seating area in the tower, as well as an en suite bathroom with a free-standing bathtub that’s placed next to the window so you can look out over the gardens while you soak in the tub. 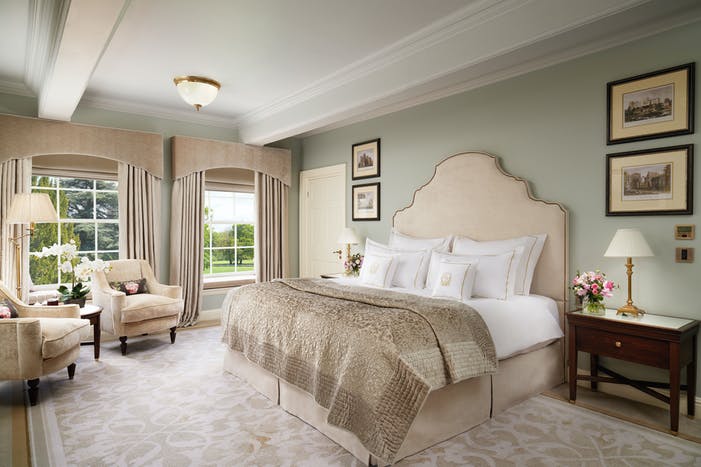 I was really impressed with just how many different dining venues there were on site. My favourite was EightyEight, an Asian-inspired restaurant that I was delighted to learn is named after the owner’s favourite butterfly that has a black and white pattern on the underside of its wing that forms the shape of two eights.

The food, which was all prepared using ingredients sourced in Yorkshire, was not only delicious but was also beautifully presented on unique crockery that seemed as though it was made especially for each dish. I’m not sure what was more stunning – the ornamental Japanese gardens that were just outside, or the artistic plates of delicious food I was served!

Grantley Hall also offer Fletchers Restaurant, a casual yet refined restaurant comprised of three dining rooms in the Queen Anne Wing that serves fine British and European cuisine throughout the day.
In the morning, breakfast is served in the Parklands Room and consists of a continental buffet and an à la carte menu with all your usual favourites including my breakfast of choice: a traditional Yorkshire breakfast filled with mushrooms, bacon, egg and seriously delicious sausages.

Other venues onsite include Valeria’s, a chic underground cocktail bar, Norton Bar & Courtyard, an atmospheric bar that serves a simple bistro-style menu that can be taken inside or on the al fresco terrace, as well as an Afternoon Tea service that’s offered in various locations throughout the hotel.

On top of that, for dedicated foodies, there’s also the Chef’s Table, where up to six guests can take a seat inside the kitchen for an intimate dining session and lesson with renowned celebrity chef, Sean Rankin. 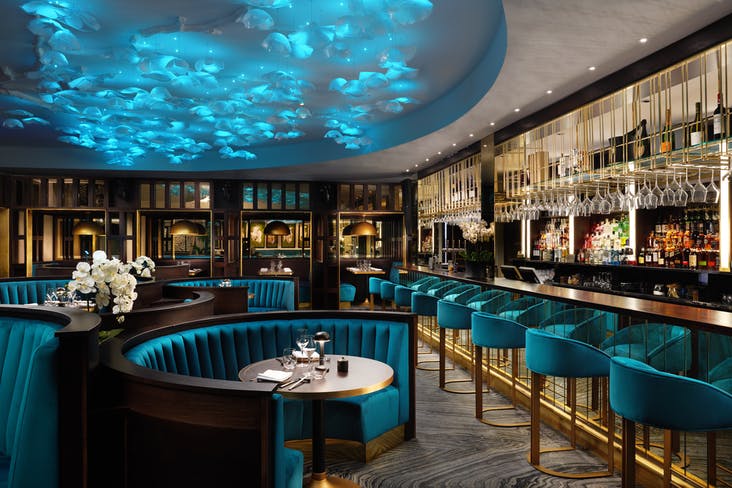 The Fountains Wing, found towards the back of the manor house, is home to some extraordinary wellness areas that extend far beyond a run-of-the-mill gym and spa.

The Elite luxury gym and Executive Wellness Area were particularly surprising to me. Set across two floors, this spacious area had everything from a strength and conditioning area to a 3D body scanner, an underwater treadmill and an EMS suit which enhances your workout through sending electric pulses through your body.

On the ground floor is the Three Graces Spa which is named after three sisters that once lived on the property, nicknamed so after the famous sculpture that depicts Zeus’ daughters, Euprosyne, Aglaea and Thalia. It’s an apt name, because inside you’ll find a wellness retreat that’s fit for the gods. 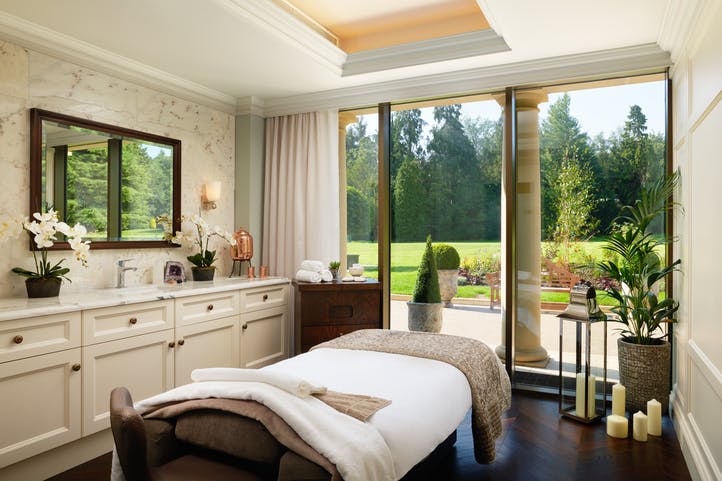 The thermal experiences on offer range from the humid heat of the sauna, to the mild steam room and finally the freezing ‘snow room’, where you can sit amongst snow (real snow!) to improve your circulation and promote your immune system function. In addition, there are a wide range of different treatments on offer in the five treatment rooms, all using Natura Bisse products, as well as yoga, Pilates and spin studios.

Most of all though, I was really blown away by the 18-metre indoor hydrotherapy pool. Softly lit and surrounded by tall stone columns, Grecian sculptures and arched ceilings, it feels like a mythological paradise. The perfect place to retreat and rejuvenate. 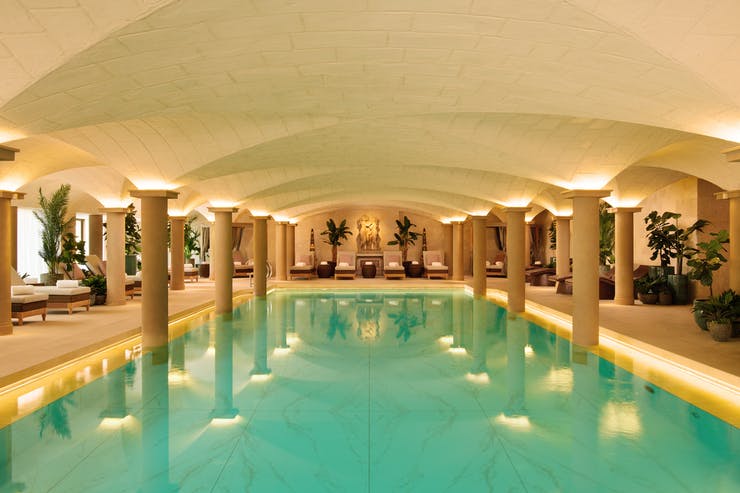 That’s not even to mention the incredible surrounding area, which (as a Yorkshire lass) I could speak about for days!

If you’re feeling inspired to tailor-make your UK luxury holiday or want to hear a little more about what a luxury holiday at Grantly Hall entails, contact one of our Travel Specialists today.