The Skeleton Coast more than lives up to its name: a desolate shoreline littered with shipwrecks and whalebones where the pounding Atlantic Ocean meets the towering dunes of the desert.

The Skeleton Coast National Park is one of the most remote areas of Namibia, and its entrance is guarded by skulls and crossbones.

For centuries, the barren coastline has maintained its reputation as one of the harshest places on Earth, once owing its name to whalebones from the booming whaling industry, and later to the hulking carcasses of shipwrecks that lie half-submerged in the sands. Over 1,000 ships have met their untimely end along the coast, dubbed the ‘Gates of Hell’ by Portuguese explorers as far back as the 15th century.

Today, exploration of the coastline is only possible by four-wheel drive or flying safari, in a light aircraft which gives unparalleled views of surging Atlantic rollers barrelling into the sheer, golden dunes.

Entrance to the Skeleton Coast National Park is strictly controlled, and expert guidance is recommended to explore the park at its best. Guides offer unparalleled knowledge of the geological forces which shaped the region, including the scars borne from the splitting of Gondwanaland, the enormous sand dunes, canyons and salt pans.

Despite its harsh climate, the area does support wildlife, including large colonies of seal along the southern part of the coast. Out at sea, there are Bottlenose dolphins, whales and penguins, not to mention many species of seabird. On land, you may spot ostrich, jackal, oryx and desert-adapted lions.

Our Travel Specialists for Namibia are on hand to offer inspiration for holidays to Skeleton Coast. 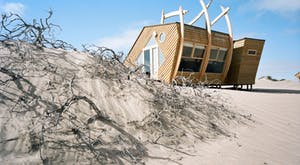 At Namibia’s Shipwreck Lodge, you’ll find yourself marooned on the evocative sands of the Skeleton Coast, overlooking the ever-imposing Atlantic Ocean in this most untamed of landscapes. The lodge takes its inspiration from the many shipwrecks that have been spat out by the wild ocean over the years, paying homage to the region with 11 standalone cabins that have been designed to resemble those do...