Vast and dramatically beautiful, Namibia’s diverse landscapes range from plunging gorges to soaring sand dunes – some of the highest in the world. Whether you choose to embark on a self-drive tour or one of our guided Namibia holidays, you’ll discover a country full of surprises, welcoming people and an impressive amount of game.

In the south, the iconic red dunes of Sossusvlei give way to a shimmering salt pan, dotted with gnarled and blackened acacia trees. On the Atlantic shoreline, explore the crumbling carcasses of doomed ships beached upon the harsh sands of the aptly-named Skeleton Coast, and explore the Germanic-influenced towns of Swakopmund, Walvis Bay and inland, Windhoek, the tiny but fascinating capital.

In the north of the country is where you will find Namibia’s greatest surprise, the game reserves and national parks which are home to a huge variety of animals. Many travellers’ exposure to Namibia usually consists of the sandy places, such as Sossusvlei’s red desert and the Skeleton Coast’s deadly dunes, but the country is an excellent safari destination and home to many animals that have adapted to cope with Namibia’s harsh environments. In Damaraland, the desert-adapted elephants have developed smaller body masses and larger feet to cope with the lack of water and abundance of sand, and are able to travel for days without hydration. Nearby, Etosha National Park is home to enormous watering holes, where you’ll find a huge variety of wildlife, with four of the Big Five living here – everything except the buffalo.

The climate of Namibia and its open spaces and Western influences can be likened to South Africa, but due to its enormous expanses of desert, it can get incredibly hot. We’d recommend visiting in the winter months of June to October when temperatures are generally cooler.

For first-hand inspiration on holidays to Namibia, call our experienced Travel Specialists for Africa today. 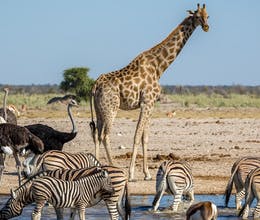 Namibia Tailor-made Self-drive Holiday
Damaraland
Etosha National Park
Sossusvlei
And 2 more...
On this tour, you’ll see all the highlights of Namibia - from one of the largest deserts in the world to ship wrecks on the Skeleton coast. Spot dese...
14 nights from £5,280 per person
Enquire Now View Itinerary

Climate
Typically semi-desert with hot days and cool nights. Traditionally the dry months of May to September. Midsummer temperatures can climb to over 40 °C.