Located on the southeastern coast of South Africa the Eastern Cape enjoys a diverse and spectacular landscape.

The coastline is rugged, unspoiled and lapped by the mild Indian Ocean, the interior ranges from the semi-arid Karoo to the lush forests of the wild coast and the temperate rainforest in the Tsitsikamma region.

The province is bordered by the popular Garden Route and is perhaps best known for Addo Elephant Park and the neighbouring malaria-free game reserves. Addo Elephant Park is one of the great success stories of conservation in South Africa, created in 1931 as a sanctuary for the last 11 elephants that had survived the hunters, extermination efforts of citrus farmers and poachers, today there are more than 450 Elephants living in Addo. The intention is to ultimately expand the park to reach the coast and protect 400,000 hectares.

Following the success of Addo, the area has benefitted from a movement to return wildlife to the area, the conversion of farmland to the bush has been made viable due to the wildlife tourism the area now enjoys. There are now a number of private game reserves located in the region which offer excellent safari experiences, conveniently located as an extension of a holiday to the Garden Route, and are particularly popular with families as the area is Malaria free.

Beyond the Game reserves Port Elizabeth, located on Algoa Bay with its safe beaches, offering a range of water sports, is an ideal family resort. Known as the 'Friendly City' Port Elizabeth records more sunshine hours than any other coastal city in South Africa and the city offers a wide range of attractions from museums and galleries to the Oceanarium featuring dolphin shows. 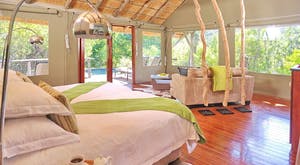 Shamwari's Bayethe Lodge is a tented paradise with twelve luxurious and seductive tented suites shrouded by rich vegetation. Each luxury tent features a private deck with plunge pool, hammock, sumptuous beds with electric blankets and fireplaces to keep you warm on the cooler mornings and evenings, and most provide the opportunity of bathing in the open air in an outdoor shower. Bayethe Lodge is ... 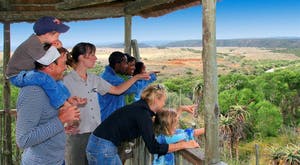 Riverdene Lodge on the Shamwari Game Reserve is an elegantly restored frontier homestead and is Shamwari's family friendly safari lodge. The lodge comprises 9 twin bedded luxury rooms, 7 of which inter-connect allowing families to enjoy space and privacy at the same time. Facilities at the lodge include a swimming pool with shallow section for children, children's supervised play room and jungle g... 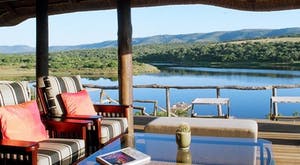 Home to 2 separate lodges, Water Lodge and Msenge Bush Lodge, Pumba Private Game Reserve is situated in the malaria-free Eastern Cape just an hours drive from Port Elizabeth. The lodges at Pumba offer a rare level of comfort and tranquillity in a remarkable setting while friendly, welcoming staff and informative rangers help make a stay at Pumba truly relaxing. The food is outstanding and excellen... 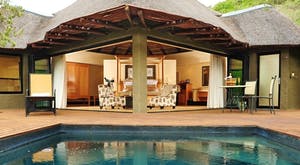 Surrounded by imposing mountain cliffs where eagles soar, the nine exclusive suites of Eagles Crag epitomises luxury and elegance amid its lush natural beauty. Each suite is fashioned in stone and glass, featuring four-poster beds, free-standing soaking tubs, indoor and outdoor showers and expansive deck complete with private plunge pool. The world-renowned Shamwari Group has been a leader in cons... 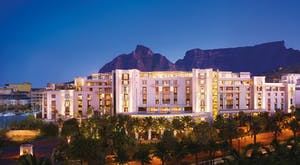 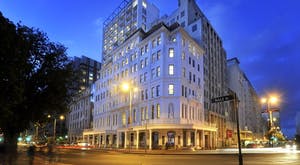