Tanzania is synonymous with safari, home to one of the most visually stunning and wildlife-rich safari circuits on the planet.

From the depths of the Ngorongoro Crater to the snow-capped peak of Kilimanjaro, the flat expanse of Lake Manyara and the shimmering grasses of the Serengeti National Park, holidays to Tanzania can be as varied as you wish – even including a beach stay on the paradise of the Zanzibar Archipelago to round off your trip.

Find out more about our amazing holidays to Tanzania. Call our Travel Specialists today and book your dream holiday now. 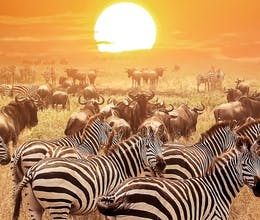 Natural Wonders of Tanzania With &Beyond
Tanzania
Lake Manyara
Ngorongoro Crater
Serengeti National Park
Tanzania is full of amazing sights, fantastic nature and incredible wildlife. Experience some of the many highlights of this country on our tour which...
8 nights
Enquire Now View Itinerary 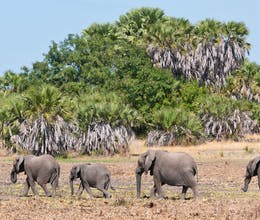 Tanzania’s northern reaches are the highlight of safari-based Tanzania holidays. It’s here that you’ll find the Serengeti, stretching for more than 15,000 square kilometres and home to what many deem to be the greatest wildlife show on Earth, the Great Migration. Each year, enormous herds of wildebeest and zebra, numbering millions, chase the seasonal rains over 1,000 kilometres in a clockwise route that takes them across the Serengeti to the Masai Mara in Kenya. The thundering of hooves and sheer volume of migrating animals is spectacle enough, but the inevitable chase by predatory big cats adds a further dimension of drama: the survival of the fittest. Tanzania holidays can also include the Ngorongoro Crater, one of Africa’s finest natural wonders and a UNESCO World Heritage Site. After the original volcano erupted over two million years ago, the landscape collapsed inwards, creating a basin that provides a home for elephants, buffalos and zebras. Safari tours travel down into the crater, where prides of lions stalk the grasslands and hyena, jackal and leopards fight for supremacy.

South of the Ngorongoro Crater is the area of Lake Manyara. The small reserve is often overlooked by many safari tours, which is a blessing for those who do visit and find it devoid of mass tourism. Instead, the volume of wildlife is a luxury for keen spotters, with over 400 species of bird and an abundance of elephants. Landscape photography fans should keep their cameras to hand, as this area is home to the towering baobab trees and enormous termite mounds that characterise Tanzania’s savannah.

More intimate still, in the south of Tanzania visitors can enjoy the space and solitude that comes with visiting Africa’s largest game reserve. Selous National Park is an untamed delight, with 50,000 square kilometres of parkland, and yet very few visitors. The variety of wildlife is no less stunning than in the north of the country, with large numbers of elephant, cheetah and giraffe, snapping crocodiles slithering through the swamps and rotund hippos wallowing in the rivers. As with all regions of Tanzania, a safari in the Selous is easily combined with a stay on the white sands of Zanzibar, where crumbling sultan’s palaces and spice plantations vie for attention with the beaches.