Raffles Hotel Le Royal is the bolthole of choice for discerning visitors to the Cambodian capital, what with its almost hundred-year history, peaceful location and unrivalled attention to detail.

A distinguished hotel group whose very name is synonymous with upscale experiences, Raffles hits all the high notes when it comes to its eminent Phnom Penh property.

Raffles Hotel Le Royal lies between the tall trees and government buildings of a smart city district, where an air of tranquillity reigns supreme, allowing guests to disconnect from the chaos of this great Cambodian city. It may sound like a cliché to say it’s an oasis, but truly – it is the real deal.

This elegant Phnom Penh resort threw open its doors for the first time in 1929, and since then has seen many an illustrious guest pass through them: Jackie Kennedy and Charles de Gaulle among them. Raffles Hotel Le Royal takes great care to maintain the high standards for which it is so cherished, from regular design restorations to employing only the best hospitality staff, ensuring each visitor – whether they are royalty or not – is warmly welcomed and made to feel as if they are.

The heritage springing from this century-old property is clear to see, and despite an extension in 1997, Raffles does everything possible to keep its history and classical elegance alive. Dark wood furnishings, polished floors, antiques and marble bathrooms point towards such a timeless look, yet there is nothing stuffy about the hotel either.

Hotel Le Royal stays fully up to date with impressive amenities in the guestrooms, an excellent spa, two swimming pools and a choice of five restaurants and bars too, so nobody goes wanting during their time at Raffles Hotel Le Royal in Phnom Penh; couples, friends or travelling as a family. 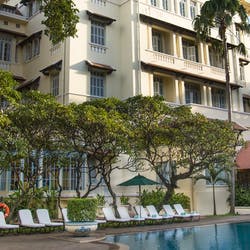 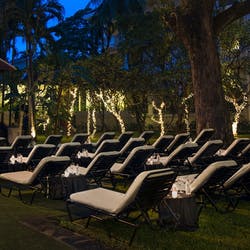 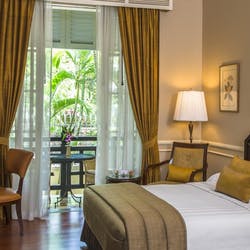 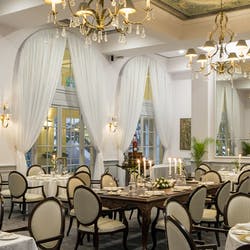 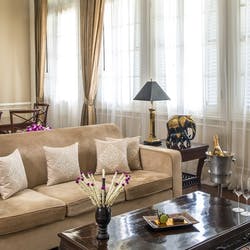 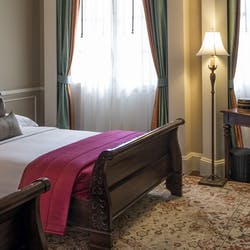 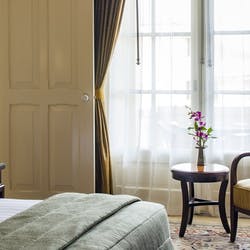 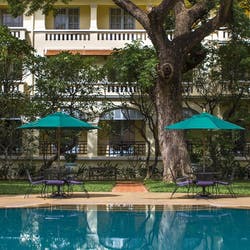 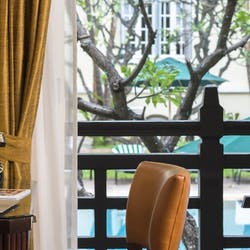 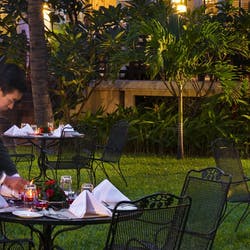 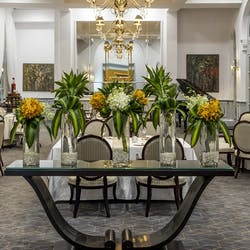 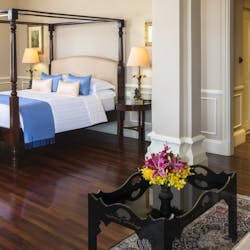 There are 175 rooms and suites spread across two wings: the original, ‘heritage’ building, and the extension that was added in 1997, which has been expertly styled to blend in with the classic charm of Raffles Hotel Le Royal. Every guestroom flaunts a balcony, separate shower and bathtub (many of which are freestanding, clawfoot tubs), air-conditioning, flat-screen TV and either twin or king-size beds – or both. Stunning hardwood floors, mahogany furnishings and cream walls then evoke a colonial-esque theme, while silk robes help make you feel like true royalty. 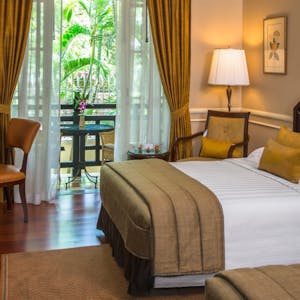 Set in the new wing, the 33sq m entry-level guestroom offers king-size or twin beds, a balcony, air conditioning and a separate bathtub and shower. These rooms overlook the gardens or swimming pool: we recommend the latter. 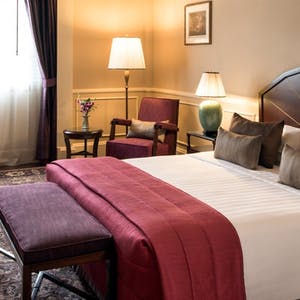 This charming room is found in the original building, bestowing it with 14ft-high ceilings, polished wood floors, a balcony and bathroom complete with claw-foot tub and a separate shower. Best of all, this room comes with butler service. 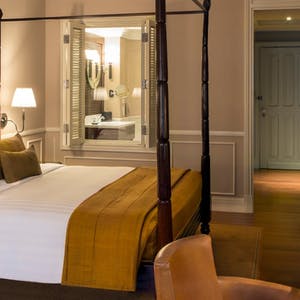 The hotel’s entry-level suite is 36sq m in size, possessing the same amenities as the rooms. This corner suite, with views of the pool and gardens, only comes with a king-size bed, and not a twin bed setup. 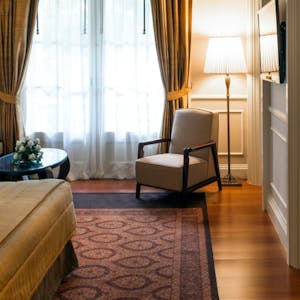 A jump up in size at 50sq m, the Colonial Suite boasts a king-size bed and accommodates up to six guests. Butler service, a balcony with garden views, spacious living area and walk-in wardrobe feature on top of all standard amenities. 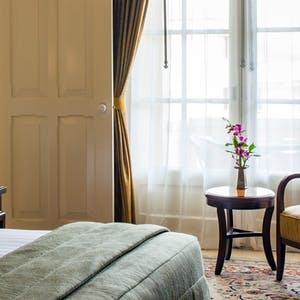 At 66sq m, the Executive Suite has plenty of space for its living area, kitchen and boudoir with king-size bed. The balcony can be accessed from two sets of French doors. 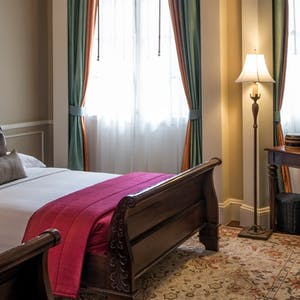 The ideal choice for families, though also for those who wish to spend a night in the original 1929 wing. Two bathrooms and two bedrooms feature in the 140sq m Landmark Suite, incorporating one king-size and twin beds, plus room for more if required. 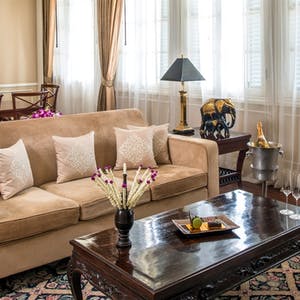 Expect the best of the best in Le Royal Suite, comprising fine antiques, gold taps and other exquisite stylings. Set on the fourth floor of the heritage wing for stunning garden views, this two-bedroom suite enjoys a dining room, living area, stocked pantry and balcony, plus butler service too. 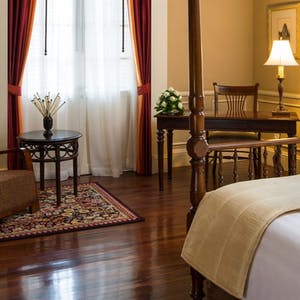 Nodding to distinguished guests of Raffles Hotel Le Royal, the Personality Suites – of which there are four – are named after Jackie Kennedy, Charles de Gaulle, Somerset Maugham and Andre Malraux. Expect butler service, a king-size bed and a balcony. 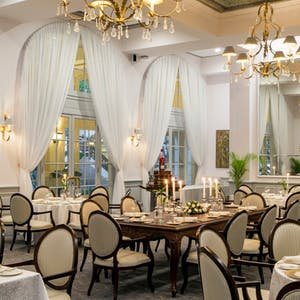 An utterly divine dining room that hosts discerning visitors from around the world, Restaurant Le Royal specialises in reimagined Royal Khmer recipes. Go for the tasting menu, set lunch or weekend brunch – a feast which can include limitless wine or champagne, should you so wish. 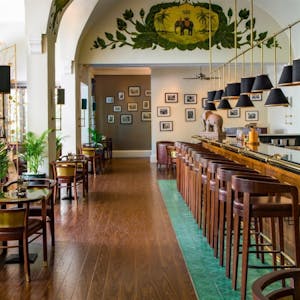 The hotel’s handsome bar is actually one of the city’s most esteemed watering holes, priding itself on serving heady cocktails (don’t miss Happy Hour everyday between 4 and 9pm) and more than a hundred varieties of gin. As well as premium alcoholic drinks, light bites can also be enjoyed here, plus there’s a signature afternoon tea to experience. And yes, elephant motifs are ubiquitous. 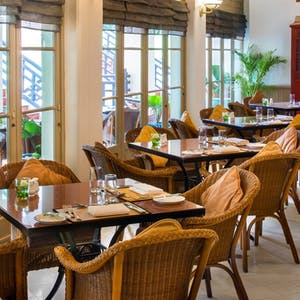 A more laidback affair – but still effortlessly elegant – Café Monivong is where to devour buffet breakfasts and dinners, to start and end your day in just the right way. Pick a rattan chair either indoors or on the terrace, and fill your plate with lip-smacking treats; at breakfast, eggs, pancakes, fresh bread and pastries make up part of the spread. 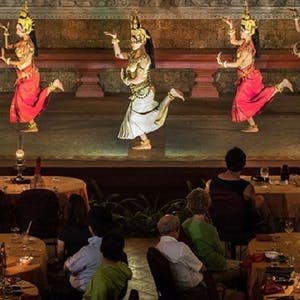 For a quintessential Cambodian experience, head to the hotel’s Apsara Terrace for a delicious evening meal and dance performances. After a buffet dinner, laden with barbecue dishes from Cambodia and across Asia, settle down for a vibrant spectacle where talented dancers in traditional dress perform on the stage; a fantastic way to spend an evening. Note that these shows only take place on Fridays between November and March. 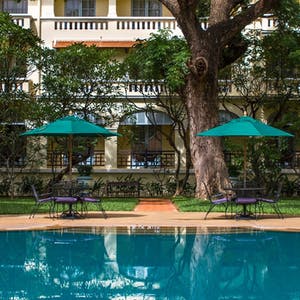 Stay refreshed between dips in the hotel swimming pool by ordering drinks and finger food from wait staff, all day long.

When you’re not relaxing by the pool or enjoying a massage treatment in the spa, be sure to go exploring beyond the hotel. Wat Phnom temple, dating back to the 14th century, is a short walk away, and the river is another five minutes from there. There’s also the Russian Market, sensational Royal Palace and National Museum to discover, which can all be reached by tuk-tuk from Raffles Hotel Le Royal. Catch an Apsara performance at the resort if visiting between November and March, or an outdoor movie screening with the kids (also taking place in high season only).

In its quest to cater for both families and serenity-seeking couples alike, Raffles Hotel Le Royal is equipped with two outdoor swimming pools: one adults-only, and one that’s child-friendly. There’s then an onsite fitness centre and spa with a wide-ranging menu of treatments and therapies, from salt scrubs to revitalising facials and heavenly massages. This tranquil wellness centre also features a sauna, Jacuzzi and steam room, to help lull you into a state of pure zen. Then, for anyone looking to take home some souvenirs from your Cambodia trip, there are boutiques selling traditional handicrafts and clothes; even cigars. 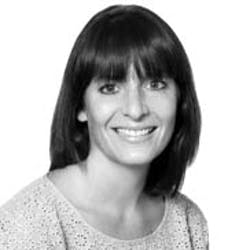