Shimla , formerly known as Simla, is the capital city of Himachal Pradesh.

In 1864, Shimla was declared the summer capital of the British Raj in India. A popular tourist destination, Shimla is often referred to as the "Queen of Hills," a term coined by the British. Located in the north-west Himalayas at an average altitude of 2,205 metres (7,234 ft), the city of Shimla, draped in forests of pine, rhododendron, and oak, experiences pleasant summers and cold, snowy winters. The city is famous for its buildings styled in tudorbethan and neo-gothic architecture dating from the colonial era.

Shimla is connected to the city of Kalka by one of the longest narrow gauge railway routes still operating in India, the Kalka-Shimla Railway. Shimla is approximately 100 km (62 mi) from Chandigarh, the nearest major city, and 365 km (227 mi) from New Delhi, the national capital. 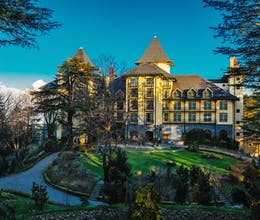 Situated at 8, 250 feet, this beautiful hotel is the former home of Lord Kitchener. With a colonial style and plenty of charm, Wildflower Hall, Shimla... 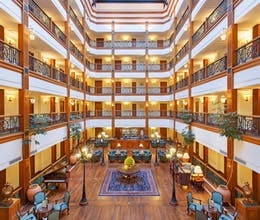 Situated in a privileged location 7,000 feet high in the Himalayas, The Oberoi Cecil is over 100 years old, having been built originally as a Himalaya...