Pier One Sydney Harbour is steeped in maritime history. Formerly a shipping wharf and P&O passenger terminal, it retained its industrial roots when in 1999 it was transformed into the spectacular hotel it is today.

Each of the 189 rooms and suites is unique in size and design, taking on the shape and layout of the original wharf building. The design blends the industrial rawness of exposed wooden beams and steel framing of the original structure with coastal chic décor and historically designed furniture from Australia and France. The most sought-after rooms at Pier One are those offering views of Walsh Bay and Sydney Harbour.

The Lobby and Pier One Bar are at the heart of the hotel; here you can relax in the comfort of plush velvet sofas and armchairs or head outdoors and take in the jaw-dropping harbour views. The centrepiece of Pier One Bar is the zinc-clad island bar, where attentive staff serve cocktails, wines and beers throughout the day and into the night. The award-winning Gantry Restaurant offers an inventive menu, celebrating modern Australian cuisine, served in a semi-outdoor setting perched on the water or in the elegant dark timbered surrounds of the dining room. For a more casual affair, mouth-watering smoked and barbecued meats are served at Kerrigan’s, a food shack set on the pier edge alongside the hotel.

Pier One Sydney Harbour is the perfect base for discovering Sydney’s attractions, entertainment and dining. The hotel is neighboured by the Sydney Theatre Company, who puts on an eclectic choice of performances throughout the year at The Wharf and Roslyn Packer Theatre. The historic Rocks area is directly behind the hotel with its upscale restaurants, open-air Rocks Markets and some of Sydney’s oldest pubs. Take a short stroll to Circular Quay or Barangaroo Wharf and jump on a ferry to explore Sydney’s majestic harbour; hop off at Darling Harbour, a pedestrian-ony recreational area where you will be entertained by street performers and enjoy its many attractions, bars, bistros and nightclubs. 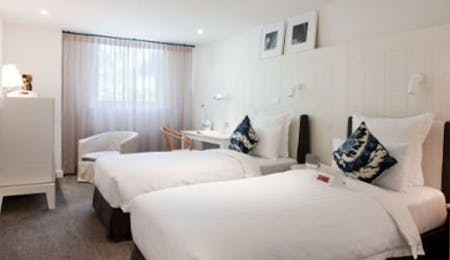 The smallest of all the room categories at Pier One Sydney Harbour, these are great value considering their spectacular location directly next to Sydney’s Harbour Bridge. These rooms come with a choice of either two twin beds or one king-size bed.
Heritage Deluxe 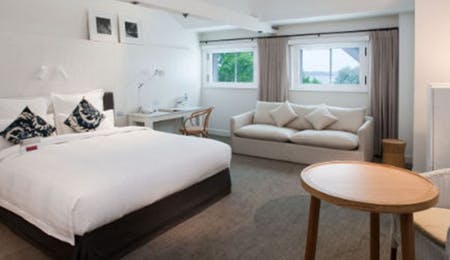 These rooms offer more space and are bright and airy; it is worth the small supplement for the extra amount of space you gain. These rooms have a king-size bed plus a double pull-out sofa bed.
Waterside Room 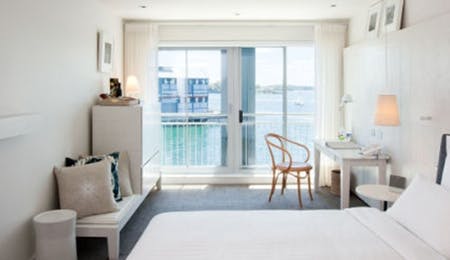 The smallest of the waterfront rooms, these bright rooms feature floor-to-ceiling sliding doors and views of Walsh Bay or Sydney Harbour.
Waterside Deluxe 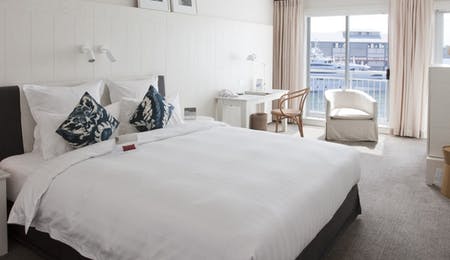 The most sought-after rooms at Pier One Sydney Harbour. These spacious and airy rooms feature a king-size bed plus a double pull-out sofa bed, and offer fabulous views of Sydney Harbour or Walsh Bay.
Hickson Suite 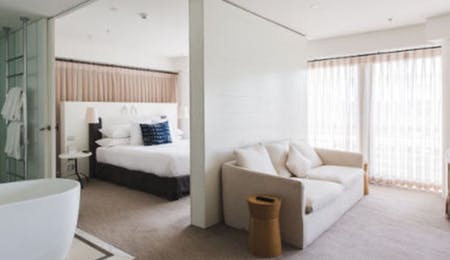 Take in magnificent views of Walsh Bay from the luxury of your bedroom or separate living room.
Walsh Bay Suite 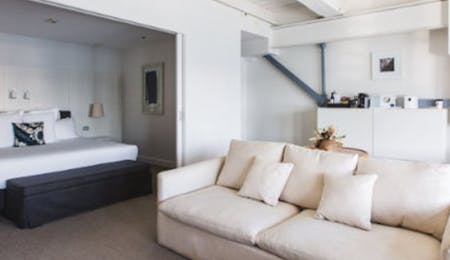 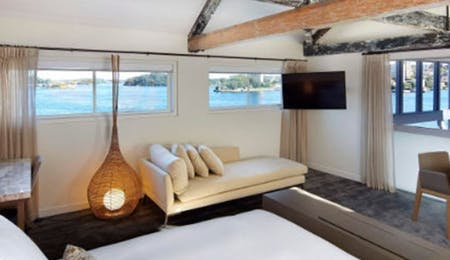 These suites are positioned to give you full views of Sydney Harbour, including Sydney Harbour Bridge and Luna Park. Some of these suites offer separate living rooms.
Harbour View Balcony Suite 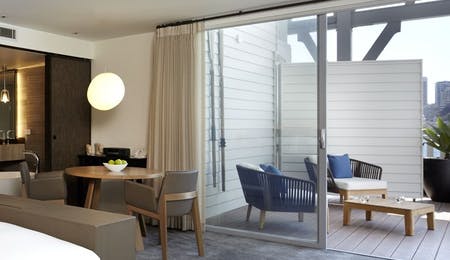 These are Sydney’s ultimate waterfront accommodations. Sit out on your spacious furnished balcony jutting out over the pier and soak up the views of Sydney Harbour.
Admiral Suite 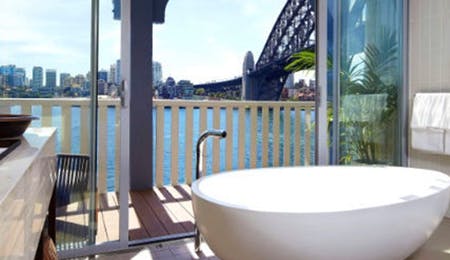 The waterfront position of these suites provides stunning Sydney Harbour views, even from the standalone tub in the bathroom, sitting directly in front of floor-to-ceiling windows. Relax on your private balcony and enjoy the views of one of the world’s most beautiful harbours.