The French Polynesian people are known for setting sail and discovering new lands. Their culture has migrated across the South Pacific and left a diverse tapestry of island traditions in its wake, each more unique than the last.

The French Polynesian islands are world-famous for their luscious forests, rugged mountains, eye-catching coral, shining sands, and unrivalled water-sports. But they are so much more than their incredible views and activities. Each island has an individual personality and charming customs that are not to be missed.

Honeymooners have always held the shimmering sands of French Polynesia close to their hearts. Nowhere in the region epitomises the atmosphere of love more than the breathtakingly beautiful and fittingly heart-shaped island of Moorea. Formed when a hulking volcano crumbled into the sea, the remote isle of Moorea boasts exceptional views, and was rated the third-best island in the world by the “Conde Nast traveller’s Readers’ Choice Awards”.

Meanwhile, over on the suitably flower-shaped island of Taha'a, the sweet scent of vanilla dances on the balmy sea breeze. Taha'a is an awe-inspiring botanical powerhouse housing an orchard of highly coveted Tahitian vanilla that produces 80% of all vanilla in French Polynesia. Thanks to this horticultural abundance, Taha'a is the sweetest island in the South Pacific.

If you’re seeking an ultra-indulgent retreat, Marlon Brando’s private island of Tetiarao continues a tradition of treating visitors like royalty. Tetiarao was once the summer residence of Tahitian chiefs and kings, and for many years this atoll was inaccessible to the general public, allowing the unspoilt nature to thrive. The eco-system is maintained and protected by luxury resort, The Brando, allowing you to see the island through the eyes of ancient Polynesia kings.

To immerse yourself deeper into the magic of French Polynesian history, Raiatea, known in local legends as Hawaiki, ‘the homeland’, is believed to be the starting point of the great Polynesian migration. Widely considered to be the Polynesian equivalent of Mount Olympus, Mount Temehani towers over the island and is home to the sacred Tiare Apetahi, a delicate flower that doesn’t grow anywhere else on earth. Yet more proof that Raiatea is an incomparable natural paradise. 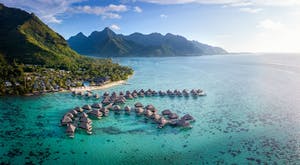 The Hilton Moorea Lagoon Resort & Spa is a luxury French Polynesian hotel that has a little bit of everything, for just about everybody. This is undoubtedly among the best-equipped five-star South Pacific resorts, boasting six fine dining restaurants and bars (plus private beachfront options), a top spa and beauty salon, boutique outlets and souvenir shops, tennis courts, a gym and lovely lagoon-... 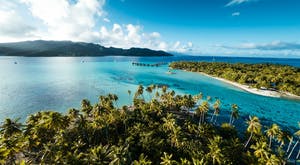 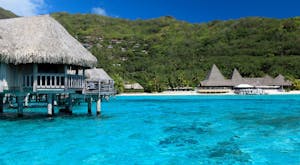 Holidays in French Polynesia are all about relaxing, taking in jaw-dropping views and enjoying the very best hospitality. Enjoy all of this to the highest degree at Hotel Sofitel Kia Ora Moorea Beach Resort, a chic and upscale hotel that enjoys a prime location. The resort enjoys access to a pristine stretch of white sand, an impossibly turquoise lagoon and fantastic tropical landscapes. The sandy... 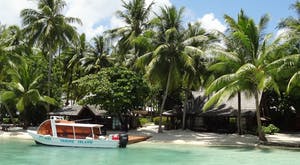