Luxury Mykonos holidays are the most cosmopolitan of all Greek island escapes. Low, rocky hills, combined with superb golden beaches, make up its gentle landscape.

The large, sandy beaches are often linked by clifftop coast paths and water taxis. The Super Paradise beach is one of the trendiest beaches in Mykonos and offer great entertainment and relaxing sunbathing. Mykonos also offers great beaches for those who prefer a quieter place to swim and sunbathe can be found in the wilder areas of Mykonos.

The capital, Mykonos Chora, boasts a colourful harbour in which little fishing boats nestle side by side with luxury yachts. Nearby, a veritable treasure trove of modern jewellery is sold at numerous friendly shops. One of the most evocative areas on the island is Little Venice. Here, several restaurants boast wonderful views of the sea and over to the famous Mykonos windmills - make sure you dine late enough to witness an unforgettable sunset.

This year
Total results: 5
Sort by: 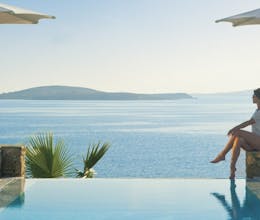 This luxury beachfront hotel is an intimate and romantic haven boasting breathtaking views of the Aegean Sea and the sacred island of Delos, one of th... 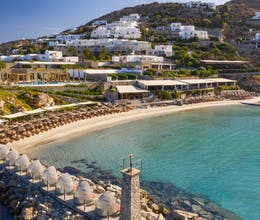 As a gem has many facets, so too does the jewel in the Aegean that is Mykonos. See it in different lights and its character changes. By day an island... 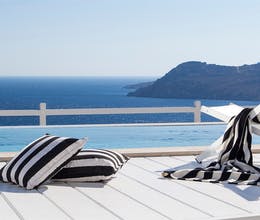 This collection of exquisite luxury villas looks out over Elia Beach, Mykonos, giving each property stunning sea views to enjoy from idyllic, private ... 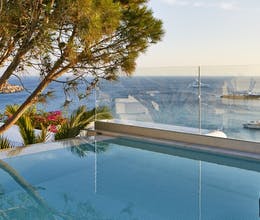 Overlooking the beautiful and tranquil bay Platis Gialos, the Myconian Ambassador is a place where contemporary design combines with traditional Mycon... 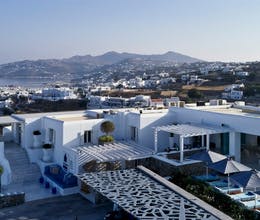 Arriving at the Myconian Kyma truly feels like arriving in Mykonos itself, with its glorious white walls and blue furnishings. With incredible panora...