Declared a National Park in 1919, the jewel of Arizona, the UNESCO World Heritage Site, Grand Canyon National Park is justifiably considered one of the greatest natural wonders of the world, at 277 miles long and 6,000 feet deep.

The most visited part of the park is the South Rim (open year-round), easily reached by car from Las Vegas or Phoenix & Scottsdale in a day, take the Grand Canyon Railway from Williams near Flagstaff or a scenic flight tour from Las Vegas or Phoenix. Follow the Rim Trail along the canyon edge, stopping at the numerous viewpoints to get a real perspective of its sheer scale. Spectacular sunrises at Mather or Yaki Point are a reward for those early risers.

Grand Canyon West Rim is the nearest section to Las Vegas and is where you will find the glass-bottomed Grand Canyon Skywalk, suspended 70 feet out from the rim edge with jaw-dropping views straight to the canyon floor. The North Rim is the least visited and accessible part of the canyon and is only open May to October. Reached by self-drive via southern Utah cities like St. George and Kanab, or northern Arizona towns like Lake Powell, you will feel at solitude here with the absence of tour groups, helicopters and airplanes.

This national treasure can be explored by hiking, train, mule, a jeep tour, scenic helicopter flights (except North Rim) and for the adventurous, white water rafting. 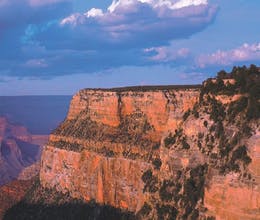 El Tovar, is located directly on the South Rim of the Grand Canyon, has welcomed guests (including Theodore Roosevelt and Albert Einstein) for over 10...