Check into one of the Big Apple’s finest five-star hotels, the New York EDITION, encased in a landmark building in Midtown that affords views of Madison Square Park and the Empire State Building.

For timeless New York elegance in the heart of Manhattan, look no further than the EDITION hotel, situated on the corner of 24th Street and Madison Avenue; overlooking Madison Square Park and the Empire State Building.

The New York EDITION is an icon in itself, housed in a beautiful clocktower that dates back to 1909; once the tallest building in the world. Although it no longer holds that title, this elegant architectural masterpiece has been transformed into a modern-day five-star hotel that attracts well-heeled clientele from around the world.

This is thanks to its smart design courtesy of Ian Schrager, a Michelin-star restaurant by chef Jason Atherton, and on-point hospitality standards that the wider EDITION hotel group are known for.

Inside, lavish communal spaces dressed in silk, steel and silver give way to pared-back guestrooms bedecked in light wood and stone. Soft beds, rain showers, large windows and stone tubs create a serene sanctuary to retreat to, with the higher category suites then offering lashings of space and additional luxuries (the Penthouse has its own kitchen and dining room).

Another perk is the view: many of the EDITION’s rooms overlook the Madison Square Park opposite, and the Empire State Building beyond; an inspiring sight to wake up to each morning.

At the EDITION New York there’s also a spa, 24-hour gym, Lobby Lounge and the Michelin-star eatery, Clocktower. Relish stunning fare that takes classic British cuisine and transforms it into something really special and pair with fine wine. Afterwards, there’s a billiards table in the adjacent bar for a little entertainment, while the buzzing nightlife of New York might just entice you out of the hotel, in this city that never sleeps. 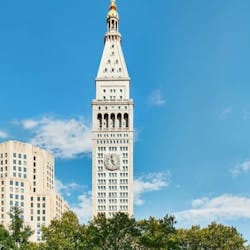 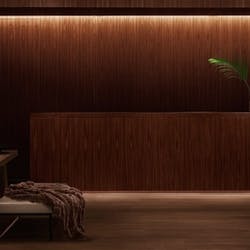 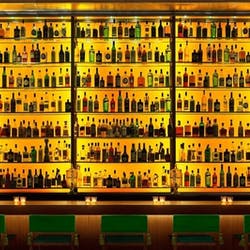 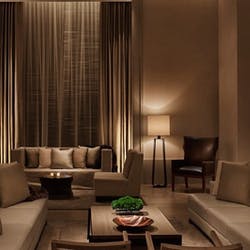 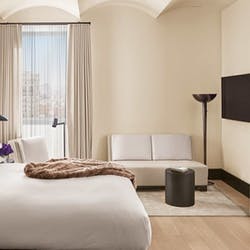 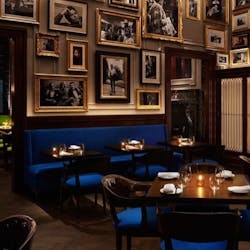 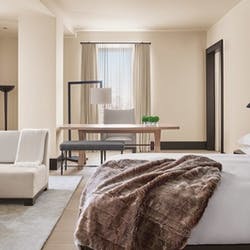 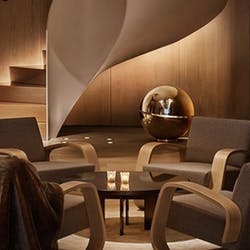 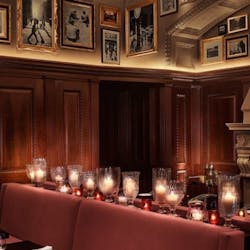 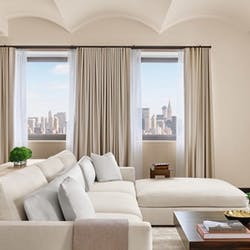 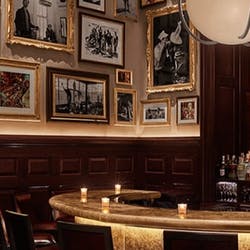 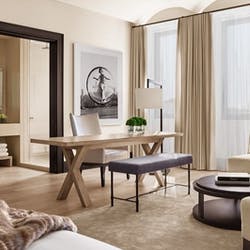 8/12 - the grand staircase at the new york edition

The 273 rooms and suites at New York EDITION are bright with natural light flowing in through large windows, illuminating the neutral interiors within to stylish effect. Although they start small, at 220sq ft, the vaulted, scalloped ceilings and light hues maximise available space, while luxe touches like wood finishes and faux-fur throws complement it all nicely. When it comes to modern amenities, you can expect fluffy bathrobes and slippers, an HD flat-screen TV, minibar, free bottled water, Le Labo toiletries, stone bathroom with rain shower and a comfy queen or king-size bed. 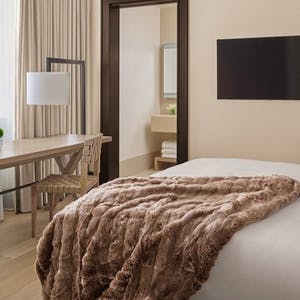 The entry-level Guest Room ranges between 220-295sq ft which, although compact, feels light and airy thanks to its neutral colour palette and large windows. This room features a king or queen-size bed and stone-clad en suite bathroom. 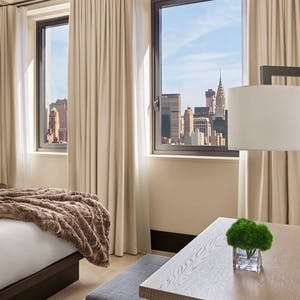 Overlooking Madison Square Park and Empire State Building, the Superior Room with king-size bed is a step up from the standard Guest Room, and slightly larger in size at 240-320sq ft. 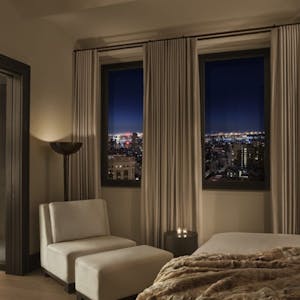 With a floorplan of 302-403sq ft, the Deluxe Room feels more spacious than previous categories. It offers views of the city and Madison Square Park, as well as a comfy king-size bed. 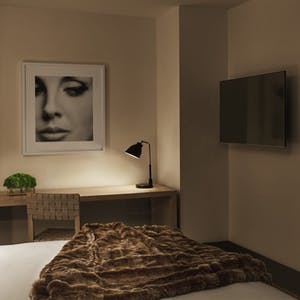 The studio overlooks the city and Empire State Building, encompassing 375-400sq ft of luxurious interiors including a king-size bed, foyer and walk-in wardrobes. 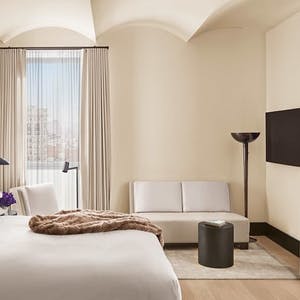 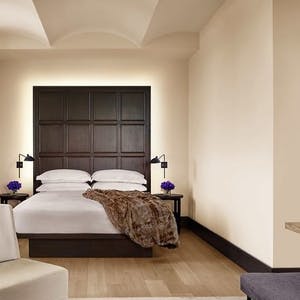 Spread out in the Loft Suite, a 452-575sq ft abode complete with living area, desk/dining table, en suite with separate rain shower and bathtub, king-size bed and views of the Empire State and Flatiron Buildings. 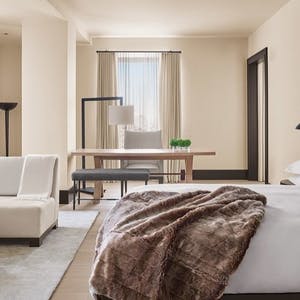 The Madison is another grand suite, though larger in size at 680sq ft, encompassing a living area, desk/dining table, en suite with separate rain shower and bathtub, king-size bed and views of the Empire State Building. 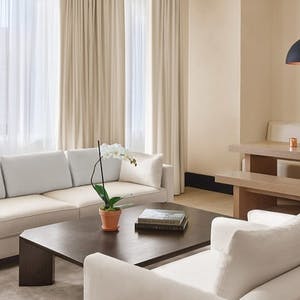 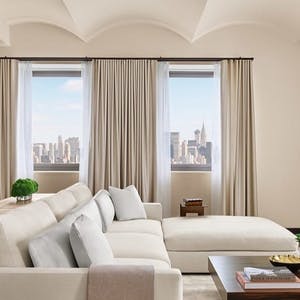 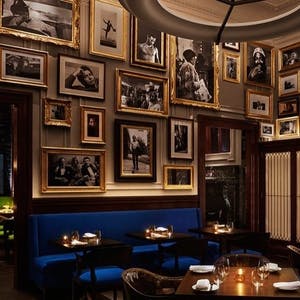 A regal restaurant comprising three separate dining rooms and cuisine dreamt up by Michelin-star chef, Jason Atherton. Sit in a handsome space adorned with photographs, dark wood furnishings and velvet chairs, while tucking into creative takes on British dishes such as upmarket fish and chips or Berkshire pork belly. Also served at the weekend is a delectable brunch and afternoon tea – not to be missed. 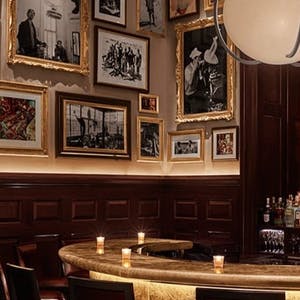 A sleek and sultry drinking den with a 24-karat gold leaf bar and fibreglass chandelier setting the stylish scene. Play a game of billiards, sip a hand-crafted cocktail or nibble on finger food as you take it all in. 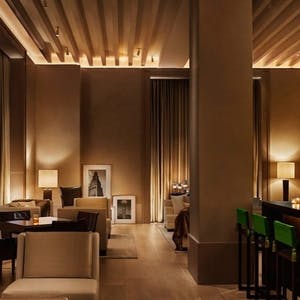 A chic bar-lounge where you can tuck into meals throughout the day, as well as sampling original cocktails and premium beverages from the respectable drinks menu.

The New York EDITION is well-placed for jaunts in and around Midtown, NYC, so take a wander from the hotel to explore the Flatiron Building, as well as the eponymous district which is home to Beaux-Arts architecture and exquisite restaurants that make for a delightful city stroll. There’s Madison Square Park directly opposite the EDITION, often exhibiting art installations, while Union Square, Greenwich Village and the Empire State Building are also close at hand. For forays further afield, take your pick from 5-6 subway stops within an easy walk from the hotel, connecting you with the rest of New York.

For a dose of pampering during your time in New York, head to the spa on the 39th floor for a relaxing massage or invigorating reflexology treatment. There’s also a gym, open 24 hours a day, which is full of modern equipment for the fitness-driven visitors. 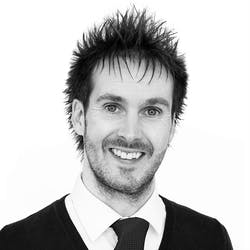