Step inside the one and only Peninsula, New York, and prepare to be wowed by the grandiose, almost flamboyant level of luxury that this five-star Manhattan hotel is known for throughout the world.

There is no compromise on quality, looks or service standards here, as The Peninsula flaunts solid marble, vaulted ceilings, gilded bannisters and elaborate chandeliers from the moment you arrive, followed by a friendly awaiting concierge team.

Yet elsewhere, things move from this stately design to something much more modern, as antique stylings are replaced by Pop Art pieces on the walls, designer furniture and swanky bar areas.

This state-of-the-art touch can also be seen in the hotel’s contemporary spa, indoor heated pool and gym, not to mention the rooftop terrace and bar; surely one of the best spots to enjoy a drink in all of New York. Fine dining also comes courtesy of The Peninsula’s Clement Restaurant which, just like most of the indoor spaces, overlooks Fifth Avenue through original arched windows. Then you have the guestrooms and suites at The Peninsula, New York, each offering that same mix of old and new as classical design elements and original turn-of-the-century high ceilings host modern king-size beds, flat-screen TVs and luxe marble bathrooms.

The Peninsula really is more than your average luxury New York hotel.

Few properties can boast its history, rival that prime Fifth Avenue location surrounded by all the Big Apple highlights, or even match the splendour of interior design, particularly the lobby – and that priceless rooftop bar is just the icing on the cake!

Every room option at The Peninsula, New York, is a fittingly sophisticated affair and spacious too, with entry-level Superior Rooms beginning at 370sq ft, going up to 3,300sq ft in the top suites, though with many sitting somewhere between the two. Inside, you’ll find an upmarket décor scheme that’s perfectly in line with the rest of the hotel. Think patterned carpets, polished dark wood furniture, armchairs, sofas, thick king-size beds and marble bathrooms plus a mix of either neighbourhood, cityscape or internal courtyard views. Suites then have a very long list of in-room extras and some offer complimentary use of the hotel’s MINI Cooper, though every option comes with a flat-screen TV and DVD player, smart-room controls, a minibar, robes and slippers, Oscar de la Renta toiletries, complimentary international calls and lots more on top. 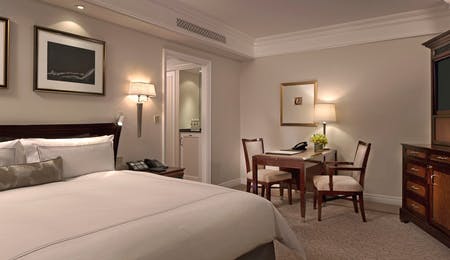 The Deluxe Room has more space available at 440sq ft, meaning a nice seating area and bigger bathroom which can accommodate a separate walk-in shower and deep-soak tub. You’ll also benefit from French windows and a range of views, either down to the hotel’s internal courtyard or surrounding neighbourhood.
Grand Luxe Room 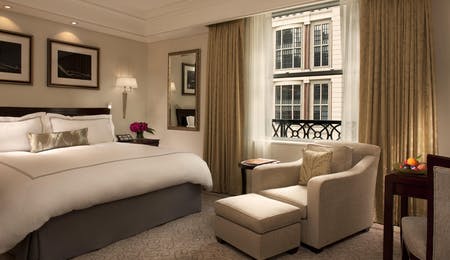 The Grand Luxe Room can interconnect with its neighbouring rooms and suites, making it ideal if travelling to New York as a family. Floorplans are also superior at 480sq ft, so a separate deep-soak tub and walk-in rain shower always comes as standard, so too improved views of Fifth Avenue or 55th Street.
Junior Executive Suite 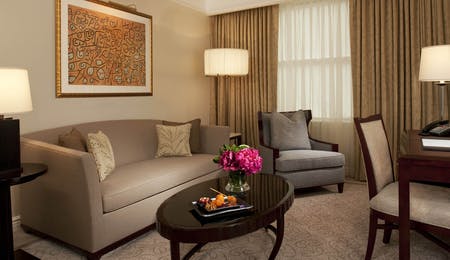 Junior Suites enjoy an open-plan bedroom and lounge space that covers 620sq ft in total, though can also create a two-bedroom suite by connecting with a neighbouring Superior Room if needed. Bathrooms come with a separate tub and walk-in shower, while views in this category are almost always of the hotel’s internal courtyard.
Junior Suite 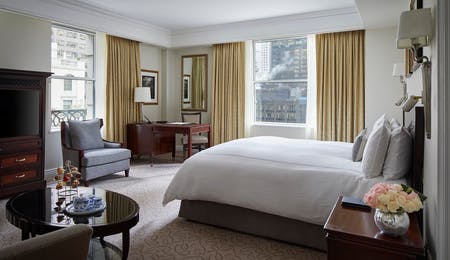 The double aspect Junior Suite comes with enviable views of the city thanks to its corner location, though also includes use of The Peninsula's MINI Cooper if looking to zip around the streets of Manhattan. Floorplans are a little smaller than their Junior Executive equivalent, though the New York views more than make up for this.
Executive Suite 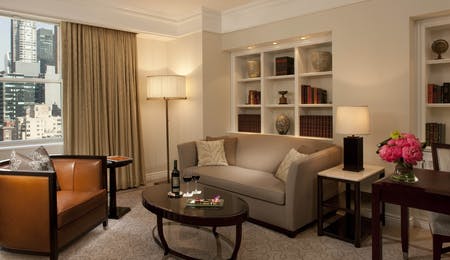 The Peninsula’s Executive Suite is one of the top New York hotel rooms, to be sure. A beautifully furnished lounge enjoys New York City views as well as its in-room library of antique books, sofas and armchairs.  The floorplan is generous too at 725sq ft, marble bathrooms are luxurious, and every aspect of this suite is just supreme.
Deluxe Suite 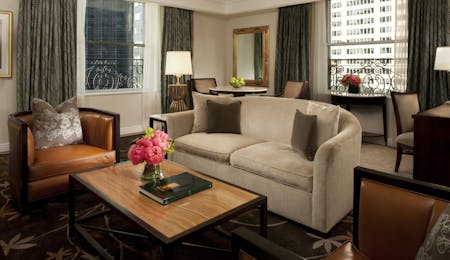 The Deluxe Suite embraces the New York lifestyle, taking design cues from luxury residences nearby and looking out to Fifth Avenue. This huge suite has a stylish lounge, dressing room, master bedroom with a king-size bed and luxe marble bathroom across a 1,050sq ft floorplan.
Grand Suite 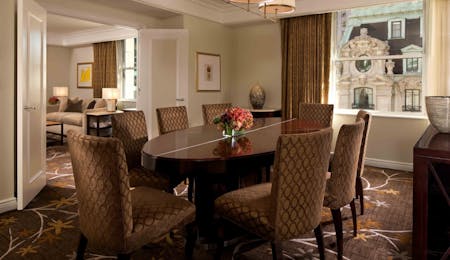 This opulent 1,625sq ft suite is tucked away in a corner of the 20th floor, meaning unbeatable views of Fifth Avenue and Central Park. While Grand Suites are set up for two, with their king bedrooms and separate lounge, there’s also a dining room that can accommodate many more and a butler’s pantry too; they can also connect for multi-room living. Then, as with many of the top suites, you’ll have access to The Peninsula's MINI Coopers if desired.
Fifth Avenue Suite 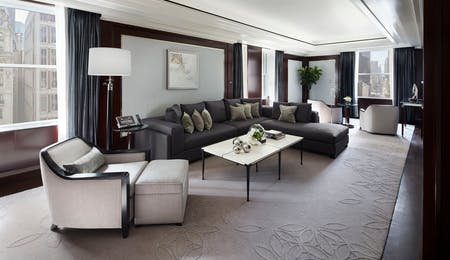 A stunning, 2,530sq ft abode that sprawls across one of the hotel’s upper floors, the Fifth Avenue Suite lives up to its name with views down to New York’s most famous streets, thanks to its multiple grand windows and corner location. Though that’s not nearly all, as within this decidedly more modern space there’s also a full-equipped kitchen, private study, large lounge and host of complimentary services too.
The Peninsula Suite 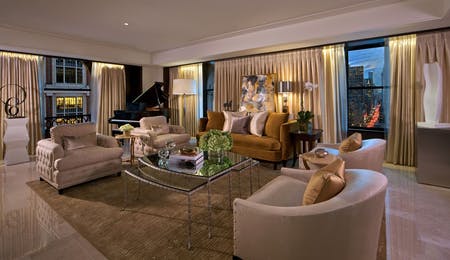 The two-bedroom Peninsula Suite boasts the kind of bespoke design touches, outright opulence and prime location that is as good as guaranteed to make your time in New York truly memorable. Within this luxurious 3,300sq ft apartment first comes fantastic city views, though also a lounge and grand piano, two bathrooms, a dining room and study, kitchen, powder room and so much else to enjoy. This is without doubt one of New York’s finest hotel rooms. 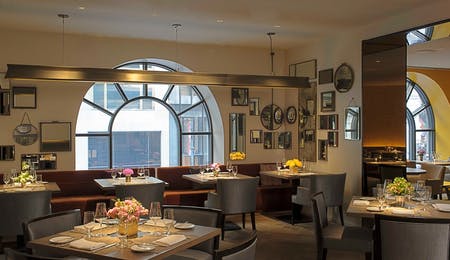 Unashamedly touting the best of modern American cuisine, the Clement Restaurant and Bar is an atmospheric fine dining option that’s big on flavour, presentation and technique alike. The space itself is also fun, with the eclectic décor not dissimilar to the variety of gourmet options on the menu, from morning till night. There’s a small cocktail bar here too, which makes for a laidback spot before or after your meal. 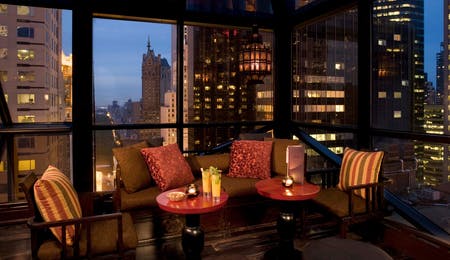 Sip on a cocktail and take in the famous New York skyline from the terraces of Salon de Ning. This trendy, sofa-clad, rooftop bar boasts unbeatable views across the city and down to Fifth Avenue below, making it one of the city’s best spots, for sure. 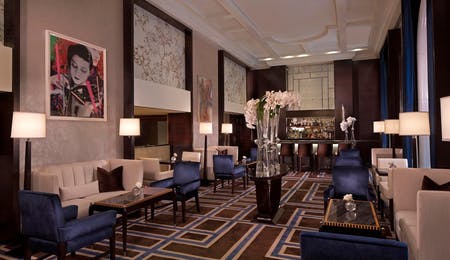 Treat yourself to one of The Peninsula's decadent afternoon teas in the sophisticated surrounds of the Gotham Lounge, an upmarket bar area that offers something altogether different throughout the day where light lunches are serviced, though also champagne and cocktails in the evening.

While staying at The Peninsula, New York, you’re situated right on Fifth Avenue, meaning the Big Apple’s main attractions are all within immediate, easy reach. Take in a show on Broadway, visit the famous department stores nearby, perhaps Times Square or the Empire State Building, and wander just a few blocks to Central Park for a coffee and hot dog! You are also right near the Museum of Modern Art here, though in truth the surrounding subways and endless stream of yellow taxis that file past the hotel will whisk you to any New York highlight in no time.

A real treat for any central New York hotel is the inclusion of a swimming pool, and thankfully you’ll find one here at The Peninsula, as well as a spa and remarkably well-equipped gym too. Everything else can be taken care of via the hotel’s concierge, and if booking one of the higher-end suites you’ll have complimentary use of a MINI Cooper to do a little exploring too. Another major highlight is The Peninsula’s rooftop terraces, lined with sofas and just perfect for aerial NYC views.

Midtown Manhattan, New York, USA. The Peninsula sits on the corner of Fifth Avenue and 55th Street, meaning a hop, skip and a jump to Central Park, ‘Museum Mile’, multiple galleries, Broadway and Times Square, among other New York highlights. Depending on traffic, La Guardia airport is around 30-40 minutes’ drive away while JFK is roughly 45 minutes by car. 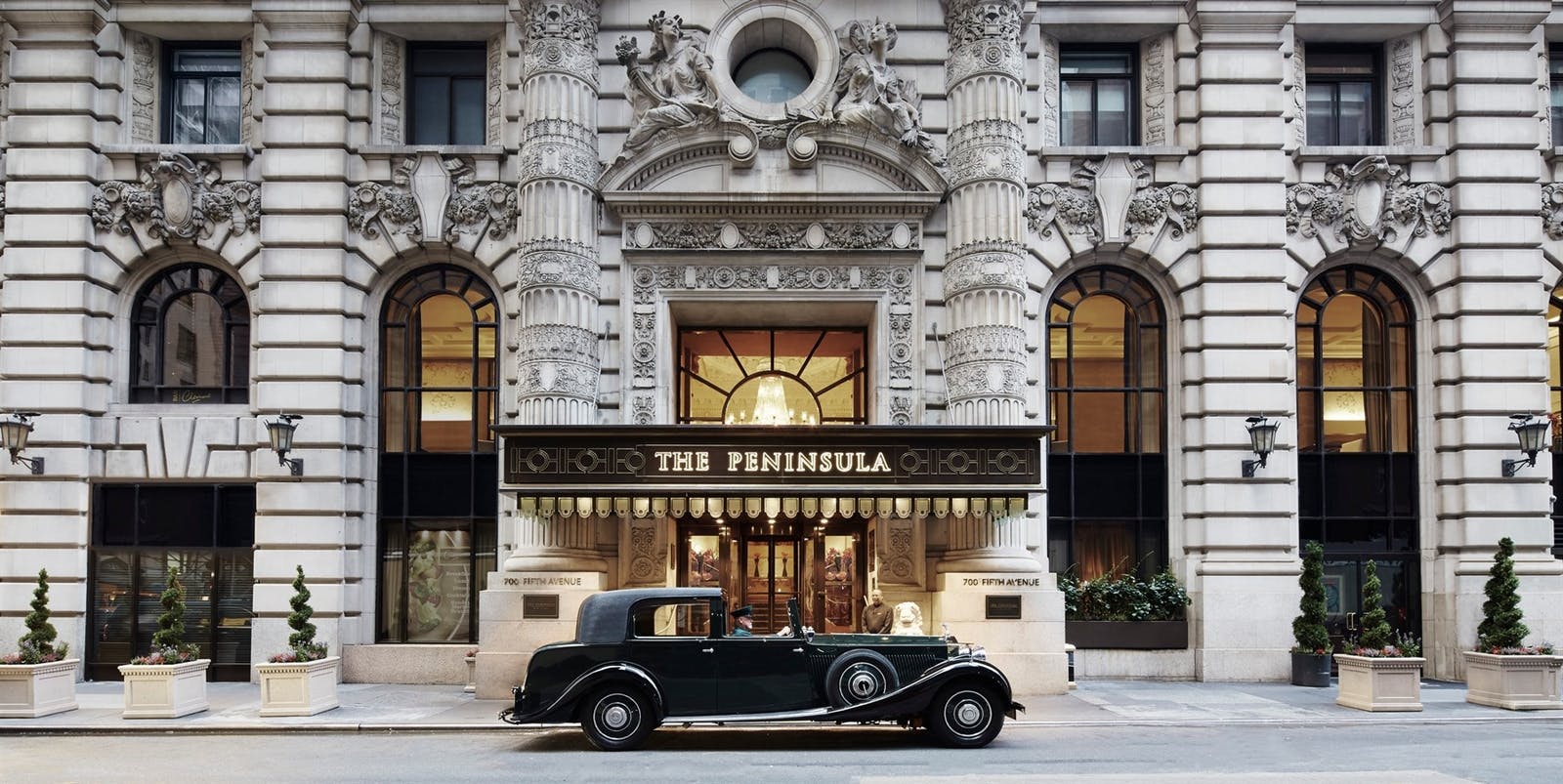